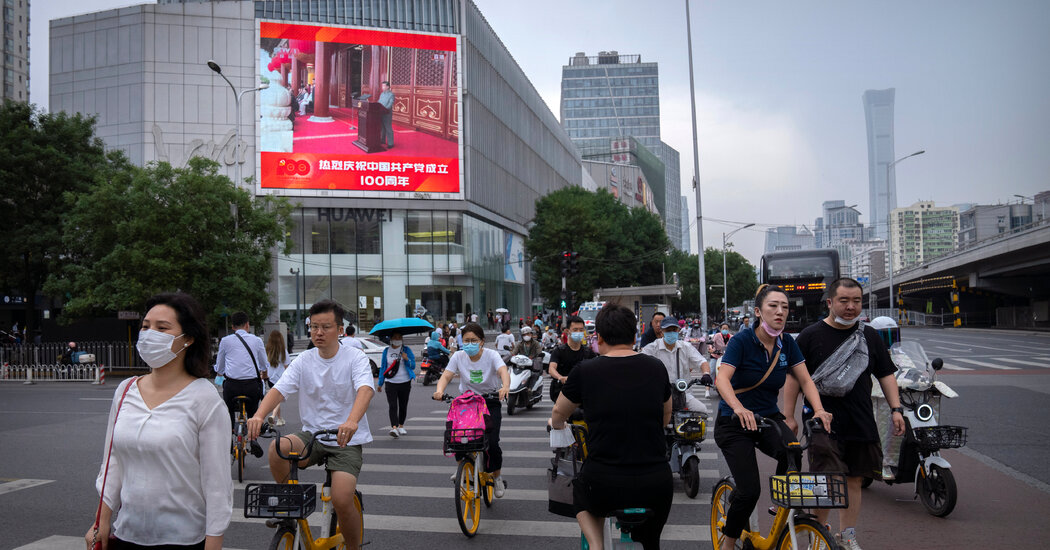 From China’s perspective, the blows from the United States just keep coming. Sanctions and export controls over the crackdown in Xinjiang. A warning to international businesses about the deteriorating climate in Hong Kong. The rejection of visas for students and researchers suspected of having links to the People’s Liberation Army.

Now the United States has rallied a broad array of nations to accuse the Chinese Ministry of State Security not only of cyberespionage but also of hacking for profit and political intrigue.

The torrent of attacks has infuriated Beijing, but six months into the tenure of President Biden, the Communist Party leadership has yet to find an effective strategy to counter the American moves.

In Beijing’s view, Mr. Biden has taken a more strategic approach than his predecessor, enlisting allies to join his campaign against Chinese behavior in ways that appear to have frustrated officials. China has resorted to its usual instinct for tit-for-tat measures, while lashing out with a heavy dose of vitriol and sarcasm.

Although both sides have said that they want to avoid a new Cold War, they are plunging into an increasingly ideological conflict that shows little sign of easing. The result has been a deterioration of relations that, to the surprise of many in Beijing, has surpassed even the four tumultuous years of dealing with President Donald J. Trump.

“The United States has declared its comeback, but the world has changed,” Le Yucheng, a vice minister of foreign affairs, said in a recent interview with the nationalistic news site Guancha.cn, echoing a Biden administration catchphrase. “The United States needs to see these changes, adapt to them, and reflect upon and correct its mistakes in the past.”

It is not clear whether the Chinese leader, Xi Jinping, has formally signaled a change in foreign policy strategy, but judging from public statements and actions in recent weeks, patience with the Biden administration has worn thin.

China has retaliated against American and European sanctions over China’s political repression in Hong Kong and Xinjiang with sanctions of its own. It has reined in the public offerings of Chinese companies on American stock exchanges. And it has stepped up military activity in the South China Sea and in the water and air around Taiwan in response to a more visceral American policy of support for the island democracy under Mr. Biden.

The quickening tempo of military operations increases the chances of armed confrontation — even if accidental. The incendiary language emanating from some officials and state media in China would make climbing down even more difficult, given a nationalistic mood at home.

Mr. Xi used a speech on July 1 celebrating the 100th anniversary of the founding of the Communist Party of China to warn that anyone who challenged the country’s sovereignty would “crack their heads and spill blood on the Great Wall of steel built from the flesh and blood of 1.4 billion Chinese people.”

Shi Yinhong, a professor of international relations at Renmin University in Beijing, said, “The Chinese government realizes very clearly up until now the pressure and unprecedented challenges that China faces in the world.”

“The problem is they know that to change this means that China has to change its fundamental policy, which is firmly deemed by the Chinese leaders as not possible, or at least not worth it,” he added.

Tensions have been mounting since the top diplomats from the two sides met in Alaska in March. Those meetings opened with an extraordinarily rancorous exchange about the issues that divide them.

Mr. Biden’s special envoy on climate change, John Kerry, followed up with a visit to Shanghai in April, but a joint statement pledging to reduce emissions included no new efforts to work together. Since then, cooperation on any issue has been scarce. Instead, there has been an almost daily exchange of recriminations.

The animosity has become so intense that even a visit by the new deputy secretary of state, Wendy R. Sherman, has become a diplomatic dispute, with officials on both sides wrestling over who would attend any meetings, tentatively scheduled for next week.

Mr. Biden, who has already met with another obstreperous American adversary, President Vladimir V. Putin of Russia, has not yet announced a face-to-face with Mr. Xi.

Mr. Biden and Mr. Xi, who met many times as their countries’ vice presidents, have not spoken since their two-hour-plus telephone call in February during the American president’s first month in office.

Zhao Lijian, a spokesman for the Chinese Ministry of Foreign Affairs, dismissed the newest American-led accusations as “made up out of thin air.” He said the United States was the world leader in cyberattacks.

Wu Qiang, an independent political analyst in Beijing, said mutual suspicion was blocking a return to more stable relations. “There is a lack of political trust,” he said. “This is the biggest obstacle.”

In Beijing, there is no question who is to blame. The view is that Mr. Biden’s moves reflect an American intention to undercut China’s growing economic and military might. The strategy to recruit allies in the effort seems to have particularly rankled.

“Biden’s administration is isolating China with a multilateral club strategy,” Yan Xuetong, dean of the Institute of International Relations at Tsinghua University in Beijing, wrote in a response to questions. “This strategy has brought about much more difficulties to China’s economic development and pressure on China’s diplomatic relations than Trump’s unilateral strategy.”

China has treated the deterioration of relations, in part, as a propaganda problem. In public statements and on social media, it has sought to discredit the United States as an arbiter of international behavior and values.

When a condominium collapsed in Surfside, Fla., Chinese state media castigated what it called a “sluggish” response, glossing over similar tragedies at home. Mr. Zhao, the foreign affairs ministry spokesman, recently called the 1921 Tulsa race massacre an example of “genocide” by the United States.

While Mr. Zhao’s “wolf warrior” persona plays well among nationalists, others in China have raised concerns about such an aggressive strategy.

At a seminar in Beijing last week organized by the Center for China and Globalization, a research group based in the Chinese capital, some scholars were stark about the country’s global image. A recent poll by the Pew Research Service, for example, found that overwhelming majorities of people in 15 major countries had a negative perception of China.

Chu Yin, a professor at the University of International Relations in Beijing, called on China’s diplomats to be more flexible and creative in telling the country’s story abroad.

“I often say that our diplomatic personnel have made great strides in their foreign language skills, but their ability to tell stories and find emotional resonance has been regressing in great strides,” Mr. Chu said at the seminar. “Now, China’s national image is not going over well, and this is directly related.”

But China’s hard-line approach seems unlikely to change soon. Within the Chinese political and diplomatic establishment, there is an understanding that this tough approach comes from the top.

Mr. Xi seems undaunted. Even before Mr. Biden won the election, Mr. Xi was reported to have reprised a theme that has since appeared much more frequently in public discussions. “The East is rising, while the West is declining,” he was said to have told a party meeting last year.

Deng Yuwen, a former editor of a Communist Party newspaper who now lives in the United States, said many in China believed the coming five years would be the most tense period in relations so far.

“China’s view now is that ‘We are so strong that it’s no problem for us to confront you. We can confront you for as long as is necessary,’” he said.