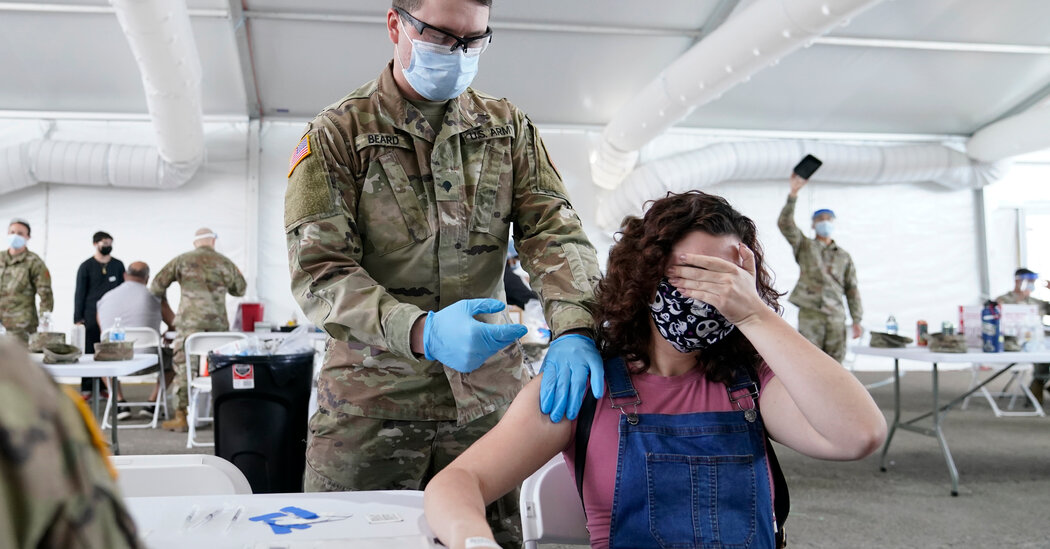 “According to one of the sites, OkCupid, people who display their vaccination status are 14 percent more likely to get a match,” Mr. Slavitt said as Dr. Anthony S. Fauci, the government’s top infectious disease expert and a bit of a sex symbol in some circles, appeared to suppress laughter. Mr. Slavitt added, “In all seriousness, people are interested in other things in life besides their vaccine.”

Highlighting the work of technology companies that can reach Americans where they are — on their phones — has been a cornerstone of the Biden administration’s efforts to combat concerns about vaccine access and hesitancy, and to remind people who have not yet received a shot that doing so could help the country emerge from the pandemic. Providers are administering about 1.88 million doses a day on average, a decrease of about 44 percent from the peak of 3.38 million reported on April 13, according to federal data.

This month, the president said that Uber and Lyft, two of the country’s largest ride-sharing services, would provide free rides to vaccination sites beginning Monday and through July 4. Other efforts, like vaccinated-only baseball seating and preferential gym access, are highlighting the benefits of a shot, without actually mandating one, and establishing two classes of Americans, vaccinated and unvaccinated.

On Friday, the latest message from the White House was, Get a shot, get a date.

Mr. Slavitt said that popular apps like Tinder, OkCupid, and Hinge — along with a suite of others, including BLK, which targets Black singles, and Chispa, marketed to Latinos — will add features meant to reach a population of young people who may have been largely isolated from each other during the pandemic, and will promote the idea that receiving a shot could help users with their intentions. Tinder plans to introduce a feature to help users find nearby vaccination sites.

Mr. Slavitt said on Friday that the effort, which could reach over 50 million people in the United States, was not an official partnership with the companies. But the White House played a significant role in rallying them to participate, an administration official said, speaking on the condition of anonymity to comment publicly about the effort.