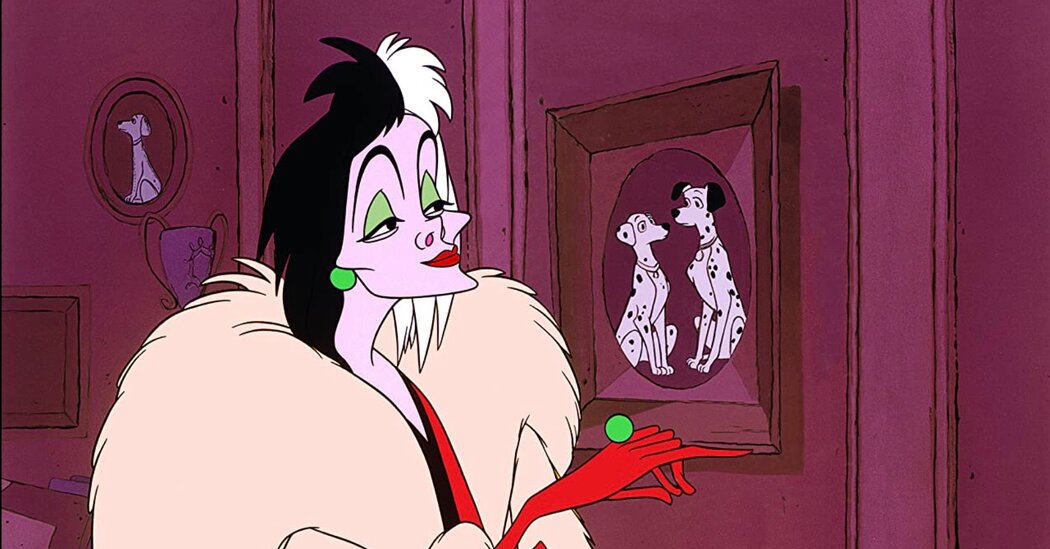 “The thing is, I was born brilliant,” Cruella de Vil says in the new live-action Disney prequel to “One Hundred and One Dalmatians.” “Born bad. And a little bit mad.”

In her first incarnation, Cruella de Vil was a married woman with a cat.

Created by the British playwright and children’s novelist Dodie Smith, Cruella was born in a 1956 children’s novel, “The 101 Dalmatians.” Yes, the skunk hair and selfish nature were there from the start, but the original Cruella was more of a spoiled socialite than a Maleficent — at least outwardly — and conveyed a preternatural calm. She doused her food in pepper, was expelled from school for drinking ink, boasted of having the loudest car horn in London and was married to a wealthy furrier — though not for love, apparently.

She wanted unfettered access to as many fabulous fur coats as possible.

Through the years, the Cruella character has been featured in a number of adaptations, including two Disney animated films, an animated TV series, two live-action “101 Dalmatians” takes (in which she is portrayed by Glenn Close), a BBC audio drama, a stage musical, a young-adult book series and now the live-action origin story, “Cruella,” with Emma Stone as the title character. And, while the Dalmatians have always been a constant, Cruella has gotten more fabulous, funny and — dare we say it? — likable.

Though the headstrong heiress of Smith’s novel lacked the spiky charisma of Close’s domineering fashion designer or the sympathetic shadow of Stone’s tragically orphaned girl who breaks bad, Walt Disney found the character intriguing enough to acquire the rights from Smith for a 1961 animated film — which produced an instantly recognizable theme song.

Marc Davis,who oversaw the animation of Cruella in “One Hundred and One Dalmatians,” deserves credit for creating the on-screen standard, from Cruella’s disheveled hair and crazed temperament to her unhinged driving and long green cigarette holder, which was modeled on one of his own. He also gave her red lipstick and an exaggerated fur coat with a red lining (she’s a devil, remember?), while Bill Peet, who wrote the screenplay, axed her cat and husband from the story.

If you set aside the dognapping and puppy-skinning plots (which are, admittedly, hard to overlook), Disney’s version of Cruella has always been a bit of a feminist fantasy. She is unmarried and childless by choice; independently wealthy; has two henchmen at her beck and call; and is unwilling to let anyone or anything stand in her way — a far cry, in other words, from the depiction of a typical midcentury housewife. (Also, a killer wardrobe.)

Close cemented Cruella’s status as a fashionista in the 1996 adaptation, in which she rocked a black-and-white mullet, a black top hat and veil, bright lipstick, winged shoulder pads and a red cigarette holder. Her ruthless fashion designer balances a slapstick physicality with sex appeal, at one point falling headfirst into a vat of molasses while wearing a voluminous red mink fur coat and thigh-high red high-heeled boots.

Close told Yahoo Entertainment in 2019 that she received permission to add dialogue like “‘Chloroform them!’ or ‘Drown them!’ Because the worse she was, the more effective she was. And in some cases, the funnier she was.”

Richard Keen, a professor of psychology at Converse College who has studied the appeal of villains, said we’re drawn to Cruella in part because she is the character we are supposed to hate.

“If society generally tells us we should not root for a bad guy, then in effect, it is like a choice is being restricted,” he said, “increasing the likelihood that you will start to like that character more.”

He credits Close’s charismatic take with helping elevate Cruella’s reputation from a spiteful socialite to a pop-culture icon of haute, vindictive glamour. It also doesn’t hurt, he said, that she’s beautiful, unlike Disney villains like Ursula in “The Little Mermaid” or the old hag in “Snow White and the Seven Dwarfs,” who tend to be more repulsive than ravishing.

“When there are exceptions, such as when Glenn Close played Cruella, we may have a bias to root for them due to our expectations, developed from previous experiences, that the beautiful characters should win,” he said.

Unlike the novel’s wealthy, married heiress, or the animated film’s sinister, skulking puppy-napper, Close’s Cruella is a glamorous fashion magnate. She’s snobbish, independent and incredibly successful. And, for the first time, the true star of the film.

Until, of course, Emma Stone came along and one-upped her. Stone’s young, careerist fashion designer, who nabs title billing in the new film, set in 1970s London, is the first incarnation of Cruella to get a PG-13 rating.

Stone’s Cruella is the youngest — and most sympathetic — take on the character yet. Sure, she lies, steals and hot-wires a luxury car, but she has a clear motive: Revenge. And, as a lower middle-class girl who becomes a rising fashion star by cleaning bathrooms and scrubbing floors, weirdly relatable.

It’s been a journey from a haughty, ink-drinking heiress to a character you can almost — almost — cheer for.