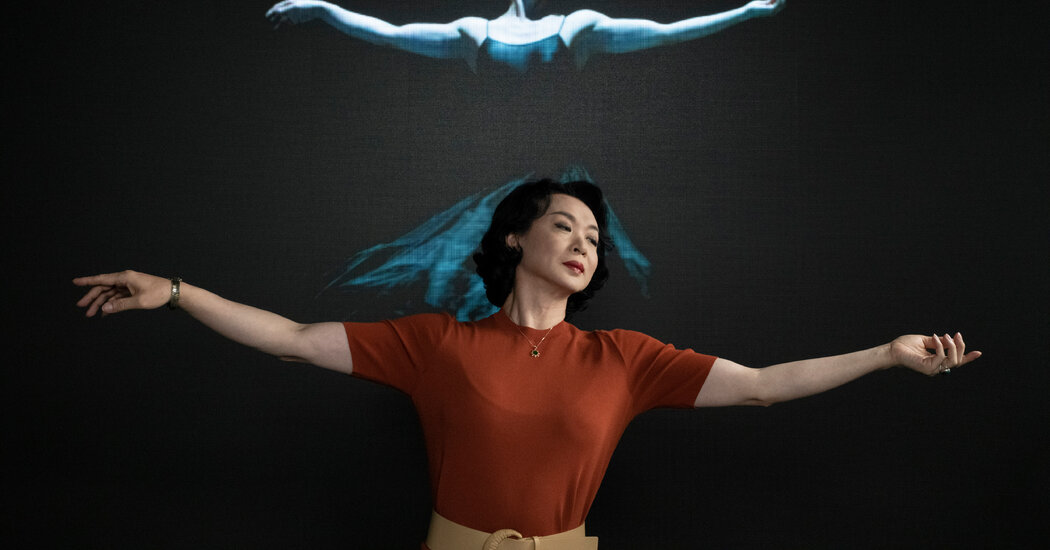 Jin Xing, a 53-year-old television host often called China’s Oprah Winfrey, holds strong views about what it means to be a woman. She has hounded female guests to hurry up and get married, and she has pressed others to give birth. When it comes to men, she has recommended that women act helpless to get their way.

That might not be so unusual in China, where traditional gender norms are still deeply embedded, especially among older people. Except Ms. Jin is no typical Chinese star.

As China’s first — and even today, only — major transgender celebrity, Ms. Jin is in many ways regarded as a progressive icon. She underwent transition surgery in 1995, the first person in the country to do so openly. She went on to host one of China’s most popular talk shows, even as stigmas against L.G.B.T.Q. people remained — and still remain — widespread.

China’s best-known personalities appeared on her program, “The Jin Xing Show.” Brad Pitt once bumbled through some Mandarin with her to promote a film.

“All my close friends teased me: ‘China would never let you host a talk show,’” Ms. Jin said, recalling when she first shared that goal with them. “‘How could they let you, with your transgender identity, be on television?’”

But even as Ms. Jin’s remarkable biography has elevated her to an almost mythic level, it has also, for some, made her one of the most perplexing figures in Chinese pop culture.

Though often lauded as a trailblazer for the L.G.B.T.Q. community, she rejects the role of standard-bearer and criticizes activists whom she perceives as seeking special treatment. “Respect is earned by yourself, not something you ask society to give you,” she said.

She also has attracted fierce criticism for her views on womanhood. In a 2013 memoir, Ms. Jin wrote that a “smart woman” should make her partner feel that she was a “little girl who needs him.” On “The Jin Xing Show,” she told the actress Michelle Ye that only after giving birth would she feel complete.

“You say that as if you’ve given birth,” Ms. Ye said with a nervous laugh.

Ms. Jin didn’t pause. “I’ve given rebirth to myself,” she said.

Ms. Jin bristles at being called a conservative. If she were a male chauvinist, she said, she would have continued living as a man. She has denounced gender-based employment discrimination and called out China’s Women’s Day as an empty commercial holiday. In May, she was featured in a Dior campaign celebrating women’s empowerment, in which she said the most important thing any woman could be was independent.

Still, she admits that she is not looking to upend the rules set by men, only to help women better navigate them.

Ms. Jin was born in 1967 in Shenyang, in China’s northeast, to an army officer father and translator mother. In memoirs, she described being pleased when family friends compared her to a “lively little girl” for her love of song and dance.

At 9, she was recruited by a military dance troupe. Her mother opposed the choice, but not on gender grounds, wanting her to instead continue with regular schooling, Ms. Jin wrote. Both boys and girls could earn prestige by dancing in the military, where the arts were seen as important propaganda tools.

As a teenager, Ms. Jin won a dance scholarship to New York, where in 1991 The New York Times called one of her performances “astoundingly assured.” After four years in the United States, she toured Europe — picking up French and Italian, in addition to the English, Chinese, Korean and Japanese she already knew.

But in 1993, at 26, she returned to China to prepare to come out as transgender.

Though she had known she was female since she was 6, she did not want to announce it until she was sufficiently prepared, Ms. Jin said. Transition surgery, though legal, was heavily stigmatized. She decided to wait until she had become one of China’s most prominent dancers.

“When you haven’t accumulated enough power, you can’t speak out,” she said. “Once you’ve achieved enough strength, and people can’t knock you down, then you can face them.”

Her calculation appeared correct. While some attacked her after her surgery, much of the public reception was supportive.

China in some ways offers more recognition to transgender people than to gay people, said Bao Hongwei, a scholar of Chinese queer culture at the University of Nottingham, in England. In the 1980s and 1990s especially, surgery was seen as a cure that allowed transgender people to live within traditional gender roles.

“She upholds all the gender norms,” Professor Bao said. “I think all this contributed to her being recognized in China’s media sphere.”

Yet even as Ms. Jin hewed to certain norms, she flouted others.

She founded Jin Xing Dance Theatre, the country’s first private dance group, in 1999. She became a single mother, adopting three children, though China’s one-child policy was still in place at that time.

And she has made being unapologetically blunt the secret to her success on television.

Ms. Jin’s television fame began in 2013, when her at-times abrasive assessments of competitors on a dance show earned her the nickname Poison Tongue. In 2015, she channeled that popularity into “The Jin Xing Show.” With guests she was warm and conspiratorial.

But she also didn’t hesitate to name celebrities who she thought lacked talent. She spoke openly about taboo issues, including sex.

She was polarizing but wildly popular, saying on her show that 100 million people tuned in each week.

Ms. Jin has consistently rejected the idea that her fame was tied to her transgender identity.

“Don’t think that I did surgery and became an enchanting person. Wrong. When I was a boy, I was plenty enchanting,” she said. “Stick whatever label on me, male or female, I’m still a very luminous person.”

In 2017, “The Jin Xing Show” was abruptly canceled. At the time, Ms. Jin blamed “small people” who were jealous of her success, but the details of the decision have never been made public.

Since then, she has continued to run her dance troupe, sold products on internet livestreams and hosted matchmaking shows, though none has approached the popularity of her talk show.

Guo Ting, a gender studies scholar at the University of Hong Kong, said Ms. Jin’s ebb in popularity coincided with a broader government crackdown on gender-related activism. While there is no clear link between the two, the state has recently sought to promote traditional values, Dr. Guo said.

Still, others noted, many in China have grown more accepting of transgender people. They said they hoped Ms. Jin — vital as she had been to that acceptance — would no longer be the community’s only face.

“I see Jin Xing as part of our parents’ generation: They have achieved progress in their time, but to us, they may seem outdated,” said Jelly Wang, 25, a transgender rights activist in Sichuan Province.

That assessment is just fine with Ms. Jin.

“I have always acted entirely according to my own wishes,” she said. “If I indirectly became an idol to some young people, that’s fine, but I have never made myself into a leader.