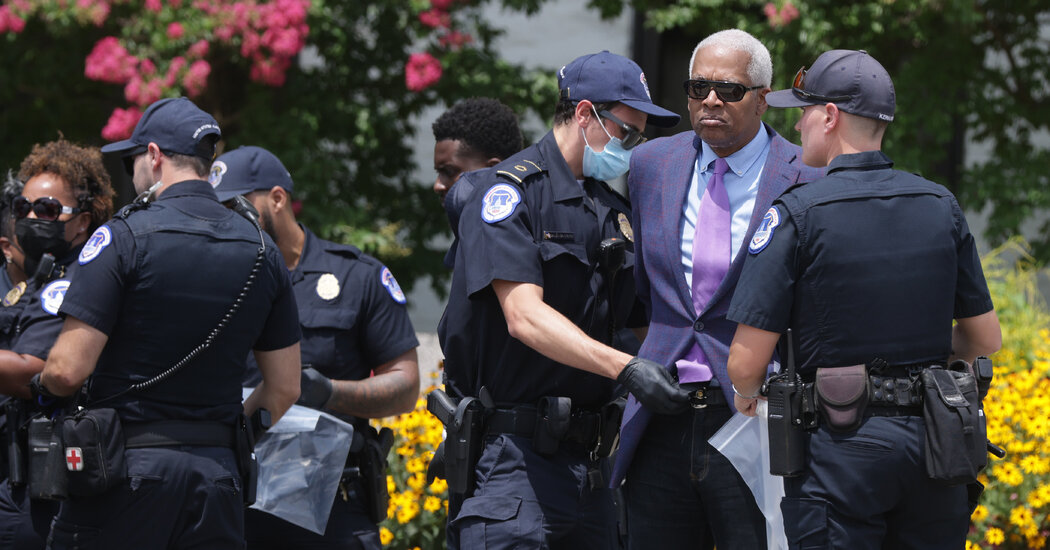 “I was arrested today protesting against Senate inaction on voting rights legislation & filibuster reform,” Mr. Johnson wrote on Twitter. “In the spirit of my dear friend and mentor — the late Congressman John Lewis — I was getting in #goodtrouble.”

In a video posted to his Twitter account, Mr. Johnson could be seen continuing to chant with protesters even after he was taken into custody with his hands bound in zip ties.

Tia Mitchell, a reporter with The Atlanta Journal-Constitution who was on the scene, posted a video on Twitter showing Mr. Johnson and other protesters with their arms linked, blocking a doorway. They were warned by U.S. Capitol Police that they could be arrested for demonstrating without a permit, according to Ms. Mitchell.

Last Thursday, Representative Joyce Beatty, Democrat of Ohio, was among nine people arrested in the atrium of a Senate office building while demonstrating in favor of two voting rights bills in Congress, the John Lewis Voting Rights Act and the For the People Act.

Both measures aim to protect and expand access to voting but face long odds of becoming law because Democrats, who have a narrow majority in the Senate, need Republican votes to overcome a filibuster. For months, Democrats have expressed frustration over their inability to advance their expansive voting overhauls as Republican state legislatures rush to pass laws that restrict voting rights across the country.

President Biden last week called the fight against restrictive voting laws the “most significant test of our democracy since the Civil War,” even as he seemed to acknowledge that the legislation had little hope of passing. At a televised town hall on Wednesday in Cincinnati, the president defended keeping the filibuster, saying that getting rid of it would “throw the entire Congress into chaos and nothing will get done.”

As news and images of the arrests spread across social media, some noted the contrast between the treatment of the members of Congress, who are both Black, and the hundreds of rioters who trespassed at the Capitol on Jan. 6 who were not detained, although police made efforts to impede them.

In an interview with Elle about her arrest, Ms. Beatty pointed out the same discrepancy.

“At the Jan. 6 insurrection, you had thousands of people damaging federal property, rushing and breaking down doors,” Ms. Beatty said. “People were dying. There was nothing peaceful about it. And look what happened. That day there were no arrests, no handcuffs, no paddy wagons.”