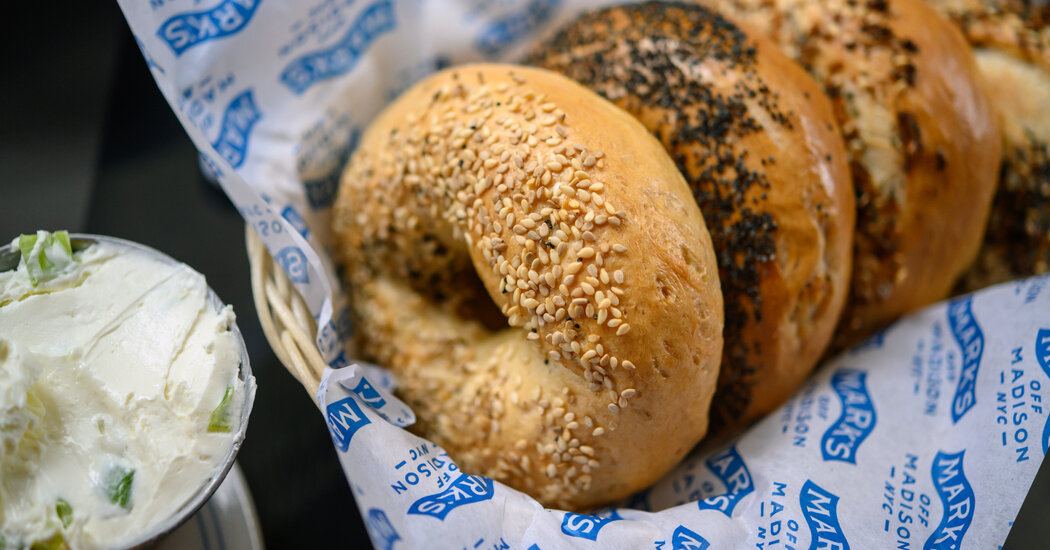 Mark’s Off Madison, Mark Strausman’s new place on East 26th Street, is trying to be at least two different restaurants, maybe three. Possibly four. All of them are good.

One of those restaurants operates only on weekend mornings and afternoons and is essentially Barney Greengrass South, serving eggs and smoked fish in various combinations with bagels and bialys.

This is obviously a great idea. It would be a great idea even if the bagels at Mark’s, baked in the back of the restaurant, weren’t firmer and chewier than they are up on 86th Street and Amsterdam Avenue; even if the bialys, also made on site, weren’t darker and crisper than just about anybody else’s; even if the cream cheese were not the best you can get in New York. The orange and grapefruit juices are fresh. The coffee is not the kind you can ignore.

Completing the effect is an indoor takeout counter where locals on their way from the dog run in Madison Square Park can pick up still-warm bagels and bialys along with sturgeon, whitefish salad, nova and salty lox. At Barney Greengrass these would come with a side of the banter that only a white-jacketed specialist in salmon with several decades’ expertise can provide. The white-jacketed salmon specialist at Mark’s is Mr. Strausman himself, though, and you are more likely to spot him out in the dining room, checking on his loyal customers.

They are legion. A few have been following him from kitchen to kitchen since 1988, when he was the chef at Sapore di Mare in East Hampton, N.Y. Far more tuned in to him after he came to Manhattan in 1990, first at Coco Pazzo and then at Campagna, and helped introduce the city to Tuscan cuisine. In truth, the cuisine was less Tuscany’s than Mr. Strausman’s own invention. Whatever it was, the Tuscan wave caused a revolution in Italian cooking in New York that lasted for a generation.

In 1996, Mr. Strausman also helped found Freds, the restaurant inside Barneys New York. Key to the success of his 23-year run there was his way with Italian cooking, especially pasta. But Mr. Strausman became at least as well known for paying serious attention to delicatessen, diner and club food like a chopped chicken salad with pears and string beans, and sliced turkey on an onion roll with coleslaw and Russian dressing — titled, autobiographically, the Jewish Boy from Queens.

He began scouting locations for an escape hatch in 2019 in case Barneys, which by then was in bankruptcy, fell into unsympathetic hands. The hedge fund that had bought the company had already tried to eighty-six Freds’ rosy sautéed chicken livers over sourdough toast, proving once again that money can’t buy taste. Mr. Strausman protested. The owners countered by firing him.

The dish, and Mr. Strausman, have been restored to their rightful place at Mark’s. Shining in a rich gravy that tastes of old port and fresh sage, the livers are piled in a proud heap you can see from the other side of the dining room. They ride again along with other dishes Mr. Strausman has been cooking for years. So side by side with bagel-and-lox Mark’s are the second and third personalities, Italian Mark’s and overperforming-coffee-shop Mark’s.

Coffee-shop Mark’s gets its fullest expression on weekend days, simultaneous with and as an alternative to Barney Greengrass Mark’s. If your vision of an ideal brunch does not revolve around smoked fish, then the tuna salads (plural; recently, there were two) and turkey sandwiches (again, two) are there for you. This is where I encountered the only letdown of my time at Mark’s, a watery brisket hash. Two strips of bacon, thick and majestically smoky, came with it and went a long way toward making up for it.

Going to Mark’s at night means going to Italian Mark’s. True, there are just enough oddities on the dinner menu — the marvelous chicken soup and the fresh Bavarian-style pretzels, both clear products of Strausmanian obsessions — to tell you that this is no normal Italian restaurant. But forget the outliers for a moment. Mark’s at night can give you a lovely, soft, slouching lump of eggplant Parmesan in which fried eggplant, tomatoes and cheese have become one. The sliced and broiled squid is tossed with barely charred bread crumbs and chopped raw tomatoes. The bread-crumb lids on the broiled clams are seasoned with enough fresh herbs to turn them green. There is a simple spaghetti in a tomato sauce, too, and that sauce is thicker, fuller and redder than just about every other version in town.

Italian Mark’s also means garlic. Garlic in every dish I just mentioned, and in most of the ones I haven’t. Once in a while, as in the impressive many-layered meat lasagna, the garlic is restrained. More often, it is sure of itself, as if it has never imagined that everybody is not deeply in love with it. The ways Mr. Strausman uses garlic suggest that his cooking comes at least as much from Queens and Brooklyn as it does from Florence. That spaghetti sauce, with its invisible jolt of crushed red peppers, would be right at home at the Park Side in Corona. The linguine alle vongole suggests a less fire-breathing version of the pink clam sauce at Don Peppe in Ozone Park.

Mr. Strausman, who is as adept with dried pasta as with noodles freshly rolled and cut in his own kitchen, has a more modern understanding of the term al dente than most of the old-guard places; he didn’t last for more than two decades at Freds by overcooking the linguine. A lot of his Italian cooking comes off as an affectionate tribute, with respectful improvements, to the Italian American food he must have eaten growing up. Even the margherita pizza, with its crunchy crust and its grated mozzarella, has more in common with a classic New York slice-joint pizza than with a puffy, blistered Neapolitan pie.

The pizza — available on all days at all hours — may or may not give us a fourth Mark’s. There are around 10 pies on the menu, enough for a full-fledged pizzeria. One, the white pizza decorated with a dark spiral of 12-year-old balsamic vinegar, deserves its own room in the museum of New York pizza, whenever they get around to building one. On the other hand, the pies in general are stiffer and not as full of life as the ones at many of the city’s newer, state-of-the-art pizzerias. It is probably better and more realistic to consider Mark’s an Italian restaurant that happens to serve pizza, a category in which there is less competition, and in which Mark’s would come out close to the top.

For dessert, just choose your favorite Mark’s. If it’s the appetizing shop, then get the lovingly traditional black and white cookies. For coffee-shop fans, it will have to be the inky-dark chocolate layer cake with sticky white marshmallow frosting. And after linguine alle vongole, it’s hard to consider anything other than the tiramisù, which incorporates what must be several demitasses of espresso. It is a dessert that knows exactly where to find the line between sweet and bitter, and how to walk it.