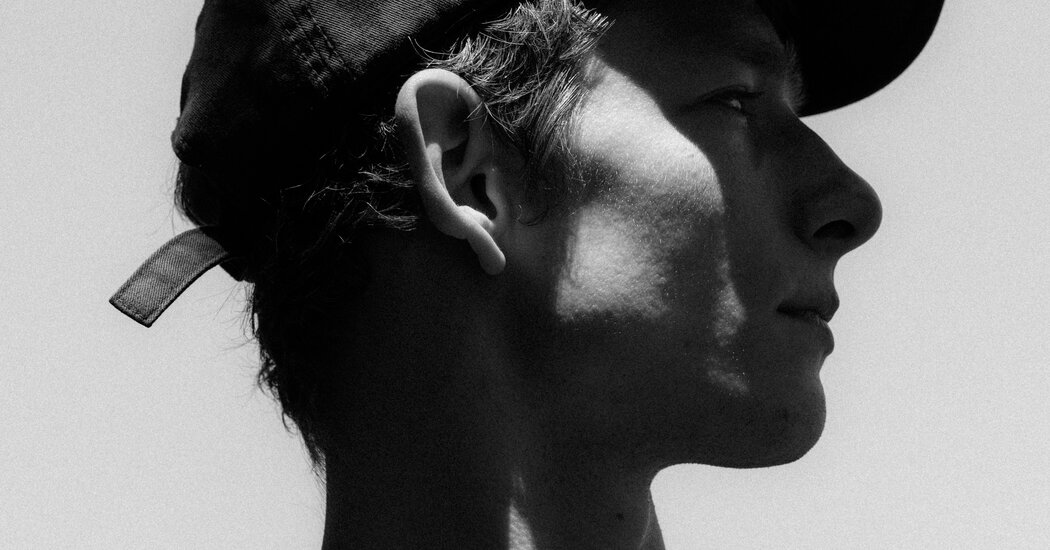 Tall and lanky, looking as if he were born wearing Wranglers, Mike Faist cuts quite a striking figure in the Amazon Prime series “Panic”: His character, Dodge Mason, is a Stetson-wearing rodeo dude who breaks untamed horses, then soulfully gazes into their eyes.

That, however, is not at all how the character was written in the Lauren Oliver young adult novel that inspired the show, debuting Friday, in which Dodge and a dozen other small-town teenagers face off in a series of life-threatening challenges — think a naturalistic “Hunger Games” with more class war.

After shooting a pilot in 2018 in upstate New York (where the book is set), the production completely rebooted in Austin, Tex., a year later, and Dodge’s back story was changed to better fit the new locale. Suddenly, the school wimp who was interested in cards and magic had been turned into a Western archetype: the strong, do-right loner who doesn’t say much. Faist went with the flow.

“Ciphers can be really boring,” said Oliver, who also wrote the screenplay, “but he manages to capture the power inherent in a certain level of invisibility.”

Dodge is quite a departure for Faist, who is best known for his Tony-nominated performance as the tormented, cynical Connor Murphy in the Broadway musical “Dear Evan Hansen.” Blessed with a rangy charisma and a bone structure that appears to have been carved with a scythe, the actor, now 29, could have easily coasted in “Panic.” But his sensibility is closer to that of such atypical leading men as Adam Driver, and he modernizes a potentially boilerplate part.

“Mike really didn’t want to be a caricature, but I don’t think he ever could be,” said Jessica Sula, who plays Natalie, Dodge’s love interest in “Panic.” She recalled that when shooting resumed in Texas after a Covid-19-imposed pause, Faist chose to live in a trailer on a plot of land with his rescue dog, Austin.

“He’s just so fabulously ridiculous and wonderful,” she said of Faist, laughing fondly.

Faist’s own course has been ascendant since he dropped out of acting school at 18, and his plum role in Steven Spielberg’s highly anticipated “West Side Story” as Riff, the leader of the Jets, should put him on Hollywood’s speed dial when it debuts in December. (Shooting wrapped in September 2019.)

And yet the actor spent much of a recent conversation candidly admitting to ambivalence and incertitude. He spent some of the past year driving around the country with Austin and writing a screenplay. He has been turning down offers and is now selling his Brooklyn apartment and heading back to Ohio.

Faist was warm and laid back on a recent sunny morning in Park Slope, and he laughed a lot in what seemed to be protective self-deprecation as he pondered his future, professional and otherwise. These are edited excerpts from the conversation.

How did they spring the new Dodge on you?

It was still the same elements in terms of, “Oh, here’s the new guy,” but instead of, like, a weird magician, he’s now a … cowboy? I was like, “What do you mean, I’m now a cowboy?” They were like: “Yeah, yeah, you’ll be fine. Maybe try an accent.”

You do look pretty comfortable playing a horse whisperer.

I’d never worked with a horse in a production before. There were two of them: a very calm, gentle horse and a skittish one. We just ended up working with this skittish horse because it was actually doing stuff. The scene where the horse moves toward me was not planned or choreographed at all. They are, you know, unpredictable.

It might have been less intimidating than a sex scene. Is the one with Jessica Sula your first as an actor?

You’d think! I did do a romantic scene [onstage] in “A Month in the Country” with Taylor Schilling. I remember getting a pretty [expletive] review. [Laughs.]

Since the fall of 2018, you’ve gone back and forth between “Panic” and “West Side Story.” How did you handle these very physical projects?

For “West Side,” I found these Bruce Davidson photos of Brooklyn gangs from the late ’50s. If you look at their photos, these guys are emaciated, they have tattoos, and they look wired. Any money they had, they would pool and buy cheap wine and maybe they would have French fries or something. Then they were doing drugs. So I was like, “I need to lose some weight.” But my body was totally breaking down. Then I tried to bulk up as much as possible for “Panic” — just eating potatoes.

Did you do any kind of special training?

I started going to the Mendez boxing gym in Manhattan for “West Side.” I was working with John Rosado, who was raised in New York, Puerto Rican, badass. He was like, “I can’t believe I’m training a Jet!”

Your first big job was in the Broadway musical “Newsies,” which is quite dance heavy. Still, was it daunting to audition for “West Side Story”?

I put together a tape, and then they said, “We want you to come back in and dance.” I was like, “Is there any way you could not have me dance?” They were like: “What are you talking about? This is ‘West Side Story’!” The only saving grace is that Justin Peck [the choreographer] and I have similar body types: tall, nothing but arms and legs. They had their work cut out for them in order to get me up to snuff.

Why aren’t you in the upcoming “Dear Evan Hansen” movie alongside your former co-star Ben Platt?

I feel like I couldn’t do it. I started that when I was, like, 21, and was with it for five or six years. When you’re doing eight shows a week, it very much turns into relying on your technique and the job of it. And the show was such a zeitgeisty thing. It really took a lot out of me, and I didn’t really have it in me anymore.

With “Panic” and “West Side Story” behind you, what are you lining up?

Maybe this is so pretentious, but “West Side” was everything I had ever hoped to accomplish as an actor. It’s really crazy, but it was transcendental: either I didn’t feel like I was myself, or I was the most authentic version of myself. I can’t really tell which one. Having gone from having no money, wanting to just be a working actor — I don’t want to just be a working actor anymore. I had that experience. It [expletive] me up.

“West Side,” in the best of ways. I can’t unsee what I’ve seen. The pandemic nearly killed us and — what, I just want to be an actor? That’s ridiculous. [Laughs.] I don’t care enough. It’s a weird thing: I can’t tell if I hate acting or if I love it too much. It’s not like I don’t plan on doing it. I just don’t want to follow the trajectory of what the industry wants me to do.

Put on a cape and wear a mask. I need to take more agency because no one’s going to do it for me. It’s tricky, but it’s interesting and pretty exciting. I’m going to hang out with my family in Ohio and then start to figure out where I’m going to go. I would like to ultimately be of service and of use; that’s when I feel at my best.