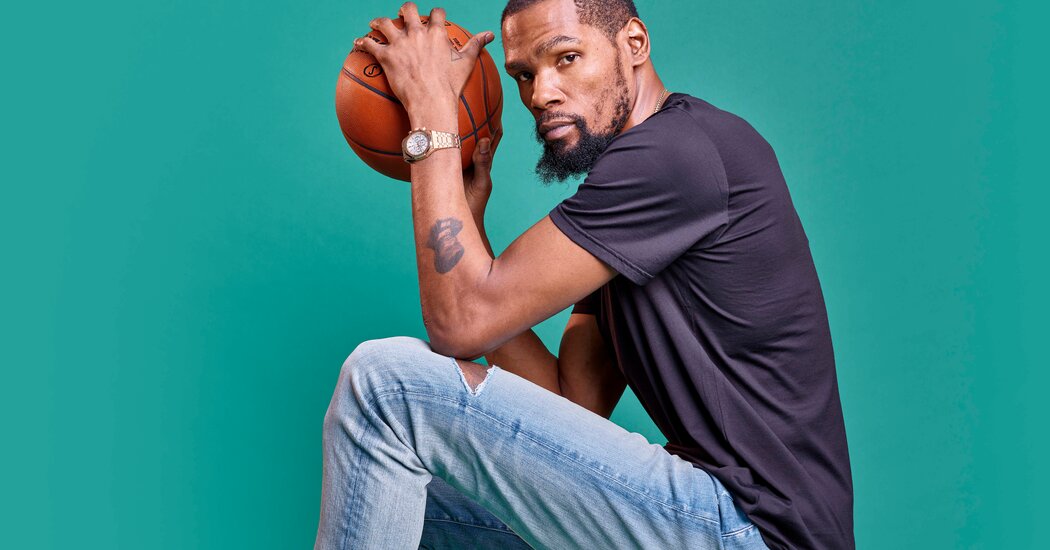 The best of the three superstars, however, is Kevin Durant. Durant is nearly seven feet tall, and he shoots 30-footers as if they are layups, and if any player has ever looked more natural or graceful on a basketball court, I have never seen him. Durant’s keynote is ease. He moves with a pure, unforced economy of motion, a frictionless glide, that makes him look almost indifferent to the action around him. He looks so elemental on a basketball court that you almost expect to find him mentioned in James Naismith’s 13 original rules for the game. (8. A goal shall be made when the ball is thrown or batted from the grounds into the basket — also someday there will be a man named Kevin Durant, he will perfectly express how this game is supposed to look, he gets it better than I do, I am just writing all this stuff down so the game exists when he comes along.) Durant has been so good, so consistently, for so long that the biggest drama surrounding his career has always been where he chooses to play. When he decides to leave a franchise, it feels sort of like finding out that the Grand Canyon has decided to move to Sweden.

In conclusion, each of the Nets’ three superstars makes you shake your head and say “wow,” but in an entirely different way. For Irving, the wow means: I cannot believe he just pulled that move off. For Harden, it means: I cannot believe that that guy right there just did all of that to all those other guys, what is happening, are we all on some kind of prank show? For Durant, the wow is the same wow you say when you see the ocean for the first time or look into a volcano — it is the wow of the sublime, of witnessing a force so beautiful and grand and elegant and simple and natural and enduring that it makes you feel, by contrast, small and lumpy and clumsy and soft. And yet, you would never choose not to look at it if you could.

Could the Brooklyn Nets experiment possibly work? The Nets’ three superstars are all basketball geniuses, but they can all also be described, quite fairly, as “moody.” Each one, in his own special way, has managed to leave a trail of drama and destruction in the wake of an otherwise illustrious career: jilted former teams, on-court tantrums, P.R. blunders, playoff flameouts. As young teammates in Oklahoma City, Durant and Harden once got so heated in practice that they had to be separated — and weeks later Harden, who had grown tired of playing in the shadow of superstar teammates, was traded to Houston. Kyrie Irving, meanwhile, won a championship in Cleveland with LeBron James but then requested a trade. The Boston Celtics welcomed him as a conquering hero, and he reciprocated the love (“If you guys will have me back, I plan on re-signing here”), until suddenly he didn’t. After months of bickering and drama and passive-aggressive quotes and Instagram essays with weird capitalization, Irving left Boston, to a chorus of jeers, to join Durant in Brooklyn. Back in Houston, Harden, who had established himself over eight seasons as a superstar, forced the trade that would allow him to join the fun in Brooklyn, too.

It would be hard to assemble a more eccentric trio. Irving once suggested that the earth was flat, and then when everyone went crazy tried to claim that he said it only to make everyone go crazy. (“It was all an exploitation tactic. It literally spun the world, your guys’ world, it spun it into a frenzy and proved exactly what I thought it would do in terms of how all this works.”) James Harden partied maskless in Las Vegas during the pandemic and then shuffled his way through actual professional games with the effort of a teenage boy unloading a dishwasher at 6 a.m. K.D. got himself in trouble on Twitter and then in more trouble on Twitter.

How could these three players, with their infinity of moods, possibly coexist? Especially through the volatile, gossipy, drama-filled grind of an N.B.A. season? Especially when anything less than a championship would be seen as an embarrassing failure? Especially in a wild, compressed pandemic season in which normal chemistry-building exercises (team meals, hangouts, practices) were largely impossible? Even in the best circumstances, moods are unpredictable. As Ralph Waldo Emerson once put it, “Our moods do not believe in each other.”

As it turns out, the superstars hardly got a chance to coexist at all. This season seemed to be cursed. Brooklyn’s Big 3 played together, all year, for only about 200 minutes. It was an endless series of minor accidents and misunderstandings and unsynced timelines. Kyrie Irving disappeared for a while, mysteriously missing seven games for what the Nets called “personal reasons.” (The gossip flying around the media section of Barclays Center would have singed your eyebrows off.) Kevin Durant got swallowed, as who among us has not been, by health and safety protocols — “Free me,” he tweeted, virally — and then tweaked his left hamstring, and what was supposed to be a short absence turned into nearly two months, 23 straight Durant-less games — and then just before he came back, James Harden, who does not get injured, got injured. Then Durant got kneed very hard in the thigh, right in his Rick James tattoo, and Irving got hit in the face, and the season was suddenly over.