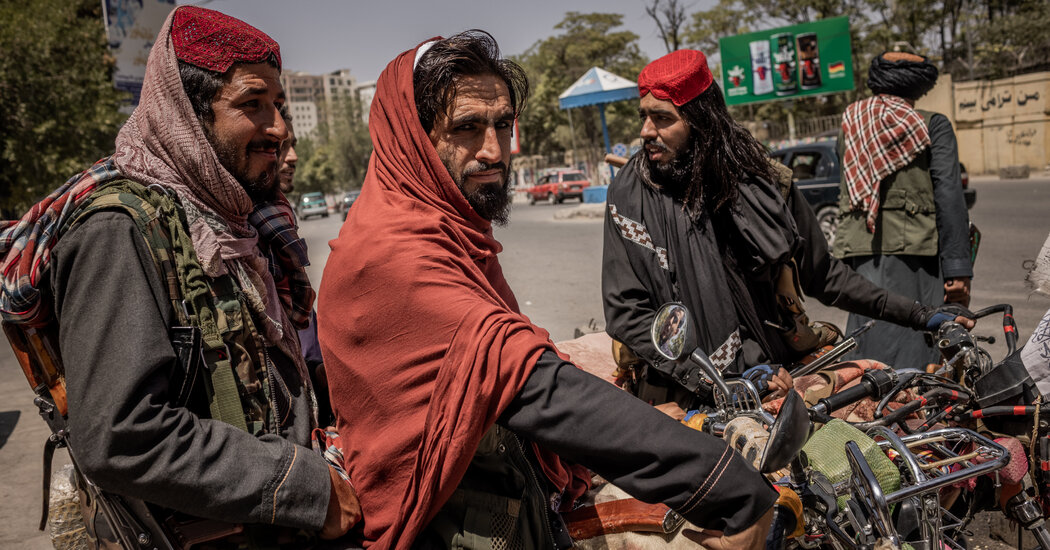 To hear more audio stories from publications like The New York Times, download Audm for iPhone or Android.

WASHINGTON — Classified assessments by American spy agencies over the summer painted an increasingly grim picture of the prospect of a Taliban takeover of Afghanistan and warned of the rapid collapse of the Afghan military, even as President Biden and his advisers said publicly that was unlikely to happen as quickly, according to current and former American government officials.

By July, many intelligence reports grew more pessimistic, questioning whether any Afghan security forces would muster serious resistance and whether the government could hold on in Kabul, the capital. President Biden said on July 8 that the Afghan government was unlikely to fall and that there would be no chaotic evacuations of Americans similar to the end of the Vietnam War.

The drumbeat of warnings over the summer raise questions about why Biden administration officials, and military planners in Afghanistan, seemed ill-prepared to deal with the Taliban’s final push into Kabul, including a failure to ensure security at the main airport and rushing thousands more troops back to the country to protect the United States’ final exit.

One report in July — as dozens of Afghan districts were falling and Taliban fighters were laying siege to several major cities — laid out the growing risks to Kabul, noting that the Afghan government was unprepared for a Taliban assault, according to a person familiar with the intelligence.

Intelligence agencies predicted that should the Taliban seize cities, a cascading collapse could happen rapidly and the Afghan security forces were at high risk of falling apart. It is unclear whether other reports during this period presented a more optimistic picture about the ability of the Afghan military and the government in Kabul to withstand the insurgents.

A historical analysis provided to Congress concluded that the Taliban had learned lessons from their takeover of the country in the 1990s. This time, the report said, the militant group would first secure border crossings, commandeer provincial capitals and seize swaths of the country’s north before moving in on Kabul, a prediction that proved accurate.

But key American decisions were made long before July, when the consensus among intelligence agencies was that the Afghan government could hang on for as long as two years, which would have left ample time for an orderly exit. On April 27, when the State Department ordered the departure of nonessential personnel from the embassy in Kabul, the overall intelligence assessment was still that a Taliban takeover was at least 18 months away, according to administration officials.

One senior administration official, who spoke on the condition of anonymity to discuss the classified intelligence reports, said that even by July, as the situation grew more volatile, intelligence agencies never offered a clear prediction of an imminent Taliban takeover. The official said their assessments were also not given a “high confidence” judgment, the agencies’ highest level of certainty.

As late as a week before Kabul’s fall, the overall intelligence analysis was that a Taliban takeover was not yet inevitable, the official said. Officials also said that around the time of Mr. Biden’s July remarks, where he called on Afghan leaders “to come together,” he and aides were privately pressing them to make concessions that the intelligence reports had indicated were necessary to stave off a government collapse.

During his speech on Monday, Mr. Biden said that his administration “planned for every contingency” in Afghanistan but that the situation “did unfold more quickly than we had anticipated.”

Facing clear evidence of the collapse of Afghan forces, American officials have begun to cast blame internally, including statements from the White House that have suggested an intelligence failure. Such finger-pointing often occurs after major national security breakdowns, but it will take weeks or months for a more complete picture to emerge of the decision-making in the Biden administration that led to the chaos in Kabul in recent days.

Intelligence agencies have long predicted an ultimate Taliban victory, even before President Donald J. Trump and Mr. Biden decided to withdraw forces. Those estimates provided a range of timelines. While they raised questions about the will of the Afghan security forces to fight without Americans by their side, they did not predict a collapse within weeks.

But in recent months, assessments became ever more pessimistic as the Taliban made larger gains, according to current and former officials. The reports this summer questioned in stark terms the will of Afghan security forces to fight and the ability of the Kabul government to hold power. With each report of mass desertions, a former official said, the Afghan government looked less stable.

Another C.I.A. report in July noted that the security forces and central government had lost control of the roads leading into Kabul and assessed that the viability of the central government was in serious jeopardy. Other reports by the State Department’s intelligence and research division also noted the failure of Afghan forces to fight the Taliban and suggested that the deteriorating security conditions could lead to the collapse of the government, according to government officials.

“The business of intelligence is not to say you know on Aug. 15 the Afghan government’s going to fall,” said Timothy S. Bergreen, a former staff director for the House Intelligence Committee. “But what everybody knew is that without the stiffening of the international forces and specifically our forces, the Afghans were incapable of defending or governing themselves.”

Afghanistan received little attention in the annual threat assessment released in April by the Office of the Director of National Intelligence; but the brief discussion was dire, noting the Taliban were confident they could achieve a military victory.

“The Taliban is likely to make gains on the battlefield, and the Afghan government will struggle to hold the Taliban at bay if the coalition withdraws support,” the report said.

But current and former officials said that while it was true that the C.I.A. predicted a collapse of the Afghan government, it was often hard to get agency analysts to clearly predict how quickly that would occur, especially as Mr. Trump and then Mr. Biden made decisions on how fast to draw down troops.

Two former senior Trump administration officials who reviewed some of the C.I.A.’s assessments of Afghanistan said the intelligence agencies did deliver warnings about the strength of the Afghan government and security forces. But the agency resisted giving an exact time frame and the assessments could often be interpreted in a variety of ways, including concluding that Afghanistan could fall quickly or possibly over time.

Sharp disagreements have also persisted in the intelligence community. The C.I.A. for years has been pessimistic about the training of the Afghan security forces. But the Defense Intelligence Agency and other intelligence shops within the Pentagon delivered more optimistic assessments about the Afghans’ preparedness, according to current and former officials.

Military and intelligence assessments predicting that the government in Kabul could hold on at least a year before a Taliban takeover were built on a premise that proved to be flawed: that the Afghan army would put up a fight.

Understand the Taliban Takeover in Afghanistan

Who are the Taliban? The Taliban arose in 1994 amid the turmoil that came after the withdrawal of Soviet forces from Afghanistan in 1989. They used brutal public punishments, including floggings, amputations and mass executions, to enforce their rules. Here’s more on their origin story and their record as rulers.

Who are the Taliban leaders? These are the top leaders of the Taliban, men who have spent years on the run, in hiding, in jail and dodging American drones. Little is known about them or how they plan to govern, including whether they will be as tolerant as they claim to be.

What happens to the women of Afghanistan? The last time the Taliban were in power, they barred women and girls from taking most jobs or going to school. Afghan women have made many gains since the Taliban were toppled, but now they fear that ground may be lost. Taliban officials are trying to reassure women that things will be different, but there are signs that, at least in some areas, they have begun to reimpose the old order.

“Most of the U.S. assessments inside and outside the U.S. government had focused on how well the Afghan security forces would fare in a fight with the Taliban. In reality, they never really fought” during the Taliban blitz across the country, said Seth G. Jones, an Afghanistan expert at the Center for Strategic and International Studies in Washington.

Two decades ago, this dynamic played out in reverse. When U.S.-backed Afghan militias began capturing territory from the Taliban in late 2001, Taliban fighters folded relatively quickly, and both Kabul and Kandahar fell before the end of that year.

Some Taliban surrendered, some switched sides, and far larger numbers simply melted into the population to begin planning what would become a 20-year insurgency.

Intelligence officials have long observed that Afghans make cold calculations about who is likely to prevail in a conflict and back the winning side, a tactic that allows for battlefield gains to accumulate quickly until a tipping point turns the fight into a rout, according to current and former analysts.

At the core of the American loss in Afghanistan was the inability to build a security force that could stand on its own, but that error was compounded by Washington’s failure to listen to those raising questions about the Afghan military.

Part of the problem, according to former officials, is that the can-do attitude of the military frequently got in the way of candid accurate assessments of how the Afghan security forces were doing. Though no one was blind to desertions or battlefield losses, American commanders given the task of training the Afghan military were reluctant to admit their efforts were failing.

Even those in the military skeptical of the skills of the Afghan security forces believed they would continue to fight for a time after the Americans left.

For months, intelligence officials have been making comparisons between the Afghan national security forces and the South Vietnamese army at the end of the Vietnam War. It took two years for South Vietnam’s military, known by the American acronym ARVN, to collapse after the United States withdrew troops and financial support. Optimists believed the Afghan military — with American funding — could last nearly as long. Pessimists thought it would be far shorter.

“For the last two or three years I have been ruefully remarking that A.N.S.F. is Afghan for ARVN,” said Mr. Bergreen, who worked on intelligence matters on Capitol Hill from 2003 to 2021. “There was an acknowledgment that the Afghan forces were not up to the long-term fight. But I don’t think anyone expected them to melt away quite that fast.”

Recent Taliban diplomatic maneuvers with other countries in the region, most notably China, lent an air of inevitability to a Taliban takeover that further demoralized Afghan government troops, Mr. Jones said.

In the end, analysts said, the Taliban won with the strategy that has so often proved successful during Afghanistan’s many decades of war — they outlasted their opponent.

“​​I am not that surprised it was as fast and sweeping as it was,” said Lisa Maddox, a former C.I.A. analyst. “The Taliban certainly has shown their ability to persevere, hunker down and come back even after they have been beaten back. And you have a population that is so tired and weary of conflict that they are going to flip and support the winning side so they can survive.”