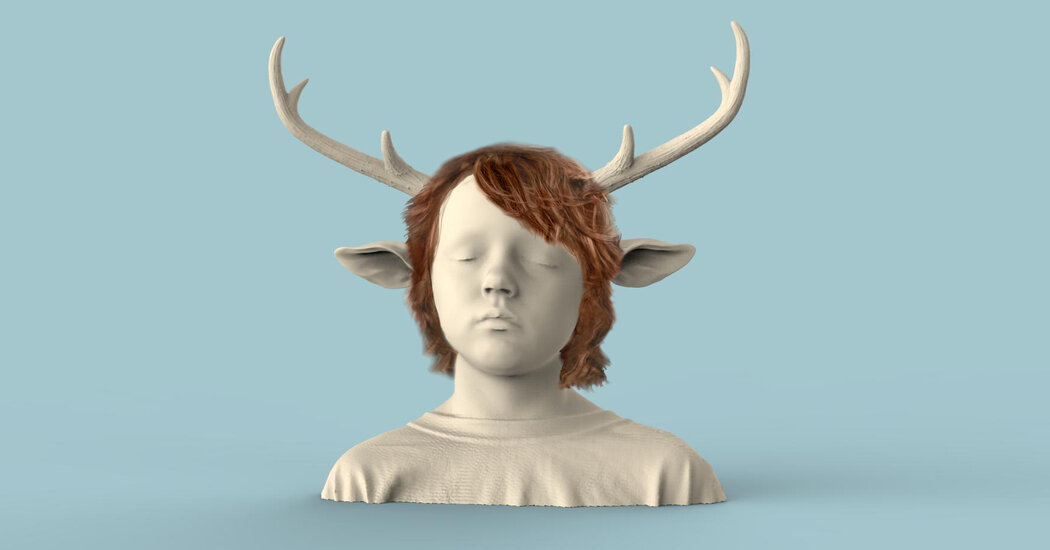 It was all about the ears.

With very little rehearsal time, the practical-effects team had to get them right. Perched atop the head of the child actor Christian Convery, who plays the part-deer hero of Netflix’s fanciful new dystopian drama “Sweet Tooth,” the ears, soft and furry, had to move just right. That meant they had to move like a deer’s.

This was a job for Grant Lehmann, puppeteer and ear wrangler. Working with a pair of hollow, bendable latex ears and a remote-control setup, Lehmann found a way to practice his job and create mischief at the same time, especially whenever someone new came on the set.

“When someone was a bit green, and I knew it was the first time I’d seen them, I’d just hold off and not do anything while they were talking to Christian,” Lehmann said on a video chat from his home in Australia. “Then I’d pick my moment to make the ears move and get that little jump-back shock from them.”

It takes a small army to get any TV series off the ground, especially one with as many moving parts (and ears) as “Sweet Tooth.” Premiering June 4 on Netflix, the show, based on Jeff Lemire’s much darker graphic novel, takes a decidedly analog approach to creating a fantastical world of hybrid creatures that would seem to demand digital solutions. Computer-generated imagery was certainly used in the making of “Sweet Tooth,” but only when necessary, often to wipe the screen clean of its hard-working puppeteers.

In a series of video chats, artists in front of and behind the camera talked about what it took to bring “Sweet Tooth” to life.

The show, like the comic, takes place in a post-apocalyptic world ravaged by a virus known as the sick. For the creators and showrunners, Beth Schwartz and Jim Mickle, the first big question was how to depict the virus. What symptoms would it inflict upon its victims? How would they react? How would they die?

“In the comic book, it’s more of a horror kind of pandemic,” Mickle said from his office in Los Angeles. “It feels like ‘28 Days Later,’ where people get growths and have ooze and stuff.”

As they worked on the pilot, Mickle remembered thinking: “I feel like we’ve seen that before. What haven’t we seen in a while? His answer: “Just a bad flu. It should just be a bad flu.”

The real world would soon provide plenty of source material for what a faithful portrayal of deadly flulike pandemic might look like. But the pilot was actually shot in May and June of 2019, long before the Covid-19 shutdown. Fortunately for the producers, they had thought deeply about what such a scenario might look like and had done their homework, looking at previous viruses such as bird flu and SARS. “All of our science tracked when the real pandemic started,” Mickle said.

Based on their research, they imagined for the pilot what specific elements — such as the hospital’s strict mask policies — might look like, aspects that would match up with the eventual reality.

Victims of “the sick” exhibit symptoms that feel familiar and require few special effects: deep rings appear around their eyes, and noses that run profusely. The telltale sign is a quivering little finger.

Health and safety measures are familiar — to a point. Yes, there are temperature checks and hand sanitizer stations. But the quarantine is ruthless: One symptomatic man, in the middle of hosting a dinner party, is tied to a chair with cellophane, and his house is set on fire.

The producers had already shot the pilot in New Zealand; then, in 2020, it was time to shoot the rest of the season. The location was doubly fortuitous. First, as anyone who has seen the “Lord of the Rings” trilogy can tell you, the island country has an almost otherworldly beauty — its endless green hills and sheer cliffs naturally suggesting a fantasy world, no need for the C.G.I. landscapes common to, say, most superhero movies.

And on a practical level, New Zealand was barely scathed by the real-life virus. While many productions around the world were shutting down, “Sweet Tooth” was able to keep going (with Covid-19 protocol in place). It was like a beautiful bubble.

“When we found out that New Zealand was one of the countries that had got their act together the quickest and we’d be able to shoot there, that was a very great thing,” said Nonso Anozie, who plays the mountainous former football pro Tommy Jepperd. “The way that they handled the regulations and the health orders that they had to follow, I really felt like they did a great job.”

For a year, the “Offstage” series has followed theater through a shutdown. Now we’re looking at its rebound. Join Times theater reporter Michael Paulson, as he explores signs of hope in a changed city with Lin-Manuel Miranda, a performance from Shakespeare in the Park and more.

For Schwartz, being able to keep working was a gift amid a time that otherwise felt bleak.

“It was cathartic,” she said from her Los Angeles office. “Unlike what was happening in the real world, ‘Sweet Tooth’ feels like it has a lot more hope in its future.”

The embodiment of that hope is Gus, the 10-year-old deer boy played by Convery. Raised in a cabin in the woods by his father (Will Forte), Gus is among the hybrid children born around the same time “the sick” breaks out. The hybrids are widely suspected of causing the virus and are hunted by a militia that calls itself the Last Men. Older than most of the hybrids, and blessed with the ability to speak, Gus is an oddity among the oddities.

“Gus is an innocent deer-boy, who is very hopeful and positive,” Convery, 11, said from Vancouver in a group video chat with Anozie; a bust of Gus’s head and antlers were visible behind him. “He’s never seen any other human than his father because they lived in the woods together for 10 years.”

Gus’s reluctant protector is Tommy. A reformed Last Man, Tommy, or Big Man, is reconfiguring his moral compass as he goes.

“In this post-apocalyptic world, Jepperd is almost a modern cowboy, wandering from town to town in a desolate and horrifically beautiful landscape,” Anozie said from London. “He reminds me of a character from ‘Old Yeller’ or ‘Shane’ or something like that, but in a modern setting, in this world where you have to lie, steal, kill and cheat — to do anything you can to survive day-to-day.”

Anozie, who has worked with many child actors, said he had an immediate chemistry with his co-star. This was largely because of Convery’s maturity in front of the camera, he said.

“He’s a very special kid,” Anozie said as Convery smiled from his half of the split screen. “When a director said, ‘I want it this way,’ he got it the first time, and he instantaneously did it.”

The relationship between Gus and Big Man is the emotional heart of “Sweet Tooth.” But Gus isn’t the only hybrid kid.

Early in the series, Dr. Singh (Adeel Akhtar), who emerges as another primary character in “Sweet Tooth,” is called to the newborn nursery. What he finds there is breathtaking: a room full of remarkably lifelike hybrid babies, fast asleep. There’s an owl baby, a dog baby, a porcupine baby and others.

It’s a moment that makes the viewer ask: How in the world did they do that?

Short answer: state-of-the-art puppetry, three to four puppeteers per baby, with a breathing apparatus installed in the chest — another instance of using in-camera solutions instead of C.G.I. The results are almost tactile. You want to reach out and touch these babies.

“If we did it with visual effects, you’re not going to get that same sense of awe when you have a green ball that’s sitting in the bassinet,” said Justin Raleigh, whose company, Fractured FX, designed the babies. “That’s your first reveal of hybrids. It’s got to work, or it doesn’t work. It’s got to pull you into the story.”

Ultimately, “Sweet Tooth” is about creating optimism in a ravaged (albeit beautiful) world. It’s about starting anew, a theme that stands out in the face of an apocalypse, or even a pandemic.

“Gus isn’t oblivious,” said Susan Downey, one of the executive producers, from Los Angeles. (Robert Downey Jr., her husband, is also an executive producer.) “He’s sharp, but he makes the choice to be optimistic. I think those kinds of messages, wrapped up in this escapist adventure, is what an audience is craving right now.

“The series says, ‘Embrace differences, don’t be fearful of them, and build a community.’ I’m excited to share it with the world.”