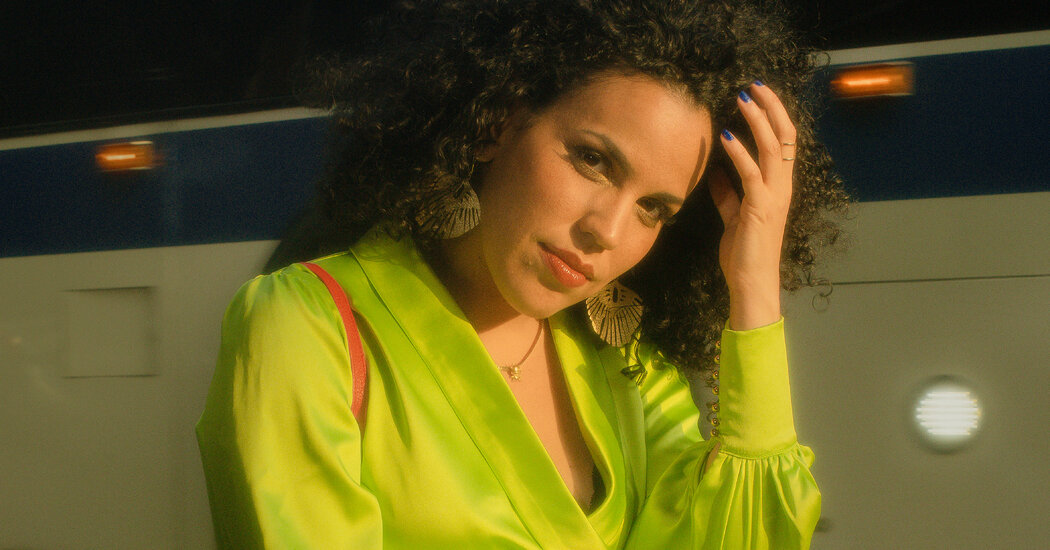 Xenia Rubinos stuck her head inside a white, doughnut-shaped couch, trying to get a better feel for the furniture’s globular shape. Earlier, she had plastered her face on an oblong, clear sculpture made out of plastic, smushing her right cheek up against the material.

Navigating a museum devoted to the Japanese American sculptor Isamu Noguchi on a cloudless late September afternoon, Rubinos, a New York singer-songwriter, approached each sculpture with the same free-spirited curiosity as she does her own music. (You’re allowed to touch some, and Rubinos wasn’t shy about going all in.) When we arrived, she suggested we tour the space in reverse order. “I just like coming in and taking the gas out of all of the things,” she said with a chuckle. “I don’t know anything about it, I don’t have to,” she said of Noguchi’s sculptures. The art “activates me.”

Over the past eight years, Rubinos’s own art has activated her listeners with its imaginative dissection of punk, R&B, jazz and hip-hop. Her first two albums, “Magic Trix” (2013) and “Black Terry Cat” (2016), artfully collaged genres and braided incisive lyrics about identity and police brutality, among other themes. The Puerto Rican-Cuban artist possesses a smoky wisp of a voice, and it holds all the experimentation together. Both releases established her as a promising figure in Brooklyn’s independent music landscape.

Rubinos’s third album, “Una Rosa,” out Friday, arrives as a rich statement about finding creative freedom. “It’s a thick listen,” Rubinos said. “It was thick even for me as I was making it.” The album touches on heavy topics at a heavy moment: mourning, heartbreak, the pressures of capitalist productivity, the killing of Breonna Taylor. One moment Rubinos nimbly intones melodies from a José Martí poem through a dense glaze of Auto-Tune, the next she growls through gritted teeth over a gauzy lattice of synths.

The emphasis on synths marks a turning point for Rubinos, who has always focused on eclecticism but emerged from a more formal jazz background: She studied jazz composition at the Berklee School of Music, but felt deeply alienated by the sexism and elitism of that scene. “I got there and I hated the way that I was objectified,” she said. “That just made me shut down and completely hide myself. I would wear baggy clothes all the time. I didn’t want to be sexualized at all, and I wanted to be taken seriously.”

On “Una Rosa,” she releases herself. The vocal performances on tracks like “What Is This Voice” and “Don’t Put Me in Red” are deliciously fragile and imperfect, which Rubinos found refreshing after years of striving for perfection. “It was like, ‘Nothing to prove to anybody here, and we’re just doing music.’ This is what this song calls for. This is what this idea sounds like,” she said.

Electronic music has intrigued Rubinos since she was a child. When she was 12, she recorded herself on a Casio keyboard and a karaoke machine. “I would hold the microphone up to it and I would program a little beat on the keyboard that had drum instruments,” she said. “I thought I was Blu Cantrell,” she added with a cackle.

For “Una Rosa,” she was inspired by the Dominican experimentalist Kelman Duran, the Afro-Caribbean spiritualists Ìfé and the spiky electronics of the producer Elysia Crampton Chuquimia, who is of Indigenous descent. All of these artists, she said, have a singular capacity to borrow elements of pop music and place them in a surreal, electronic palette — a gap she had long yearned to close in her own music.

The melody of the title track, an electronic reimagining of a Puerto Rican danzón by José Enrique Pedreira, returned to Rubinos in the early hours of a melancholy morning during the spring of 2019. She remembered the tune was from a color-changing fiber optic flower lamp her great-grandmother once owned, but it took her two years to identify it as a composition by Pedreira. That lamp served as the inspiration for the album artwork of “Una Rosa.”

During the recording process, Rubinos said she became “obsessed” with traditional Cuban rumbas. She was especially enthralled by a snippet in the documentary “Las Cuatro Joyas del Ballet Cubano” (“The Four Jewels of Cuban Ballet”). Eventually, she traveled to Havana in search of its origin, and she spent time visiting the Ballet Nacional de Cuba, where a family friend is a dancer.

“I would go to write for the record, and I would play clave for five hours not knowing what I was doing,” she said. “Sacude,” one of the album’s standouts, came to her in a flurry during that period: the syncopated insistence of a clave pulsates under the brassiness of Rubinos’s voice, a wall of synths shape shifting in the chorus. “Cuanto quisiera salir de esto ya/Si sigo este rumbo/Pronto me sorprende la muerte,” she sings in Spanish. “Oh, how I wish I could escape from this already/If I stay on this course/Soon, death will sneak up on me.”

This is one of the album’s greatest gifts: its sense of high drama. Many moments on “Una Rosa” recall the narrative tension of a tragic film, like “Did My Best,” a chronicle about the sorrow of sudden loss peppered with the sound of exploding fireworks, closing doors and clicking car turn signals; or “Ay Hombre,” a bleeding-heart torch song that evokes the anguish of classic bolero singers. Rubinos refracts these sounds through an electronic prism, reshaping them as soundtracks for imagined romances and deaths in the 21st century.

The album’s narrative urgency was born out of a period of turmoil for Rubinos, who said she felt drained after a long span of nonstop touring and performing. “When I came back from that, I was on empty and I didn’t feel like writing songs. I didn’t feel like listening to songs,” she said. “In my personal life I felt like [expletive].”

She sought guidance from a curandero, a healer, who did a spiritual cleanse and diagnosed her with “pérdida de espíritu,” or “loss of spirit.” She also began working with a choreographer friend, trying to reconnect to her body through the pleasure of dance and improvisational movement.

While all of these experiences played a part in “Una Rosa,” Rubinos said the album isn’t about a journey of healing. “I struggle with talking about the context of what happened to me going into this record, because the music itself is not about depression or about mental health,” she said. “Es difícil, a veces.” It’s difficult, sometimes, she explained in Spanish. “There always has to be a message or there always has to be this takeaway from every song,” she added. “And it’s hard for me, because it’s not so linear.”