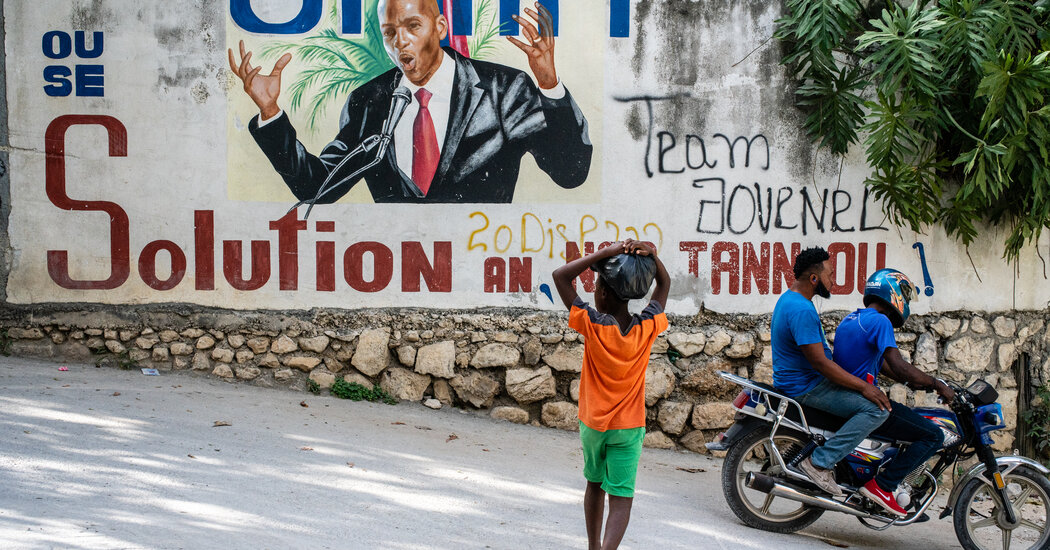 PORT-AU-PRINCE, Haiti — Teachers and religious leaders, lawyers and farmers, they are veterans of crisis who thought they had seen it all in recent years, looking on in outrage as the democracy they were fighting for was whittled away, gutted under the watch of President Jovenel Moïse.

Then the gunmen struck, and a country that had been adrift now felt rudderless.

Mr. Moïse is dead, assassinated in his own bedroom, and the few leaders left in the country have been so busy jostling to take his place that they have not even settled on a plan for burying him. It took a week just to announce that they had formed a committee to organize the ceremony.

“All of this fighting,” lamented Monique Clesca, a former United Nations official at a gathering of Haitian civic leaders Tuesday in the back of a restaurant in the leafy suburb of Pétionville, a 10-minute drive from where the president was killed.

For months, as Haiti fell deeper into crisis over Mr. Moïse’s rule, with protests upending the nation and Parliament reduced to a shell in the absence of elections, Ms. Clesca’s group had been meeting regularly, desperate to come up with a plan to get the country functioning again. Health care, a functioning judiciary, schools, food: Their goals were at once basic and ambitious.

Now, the crisis is even worse.

All the focus seems to be on who will emerge as Haiti’s next leader, she said. But the group wants the country to think bigger — to reimagine itself, and build a plan to get to a different future.

As Haitians did in 2010, when an earthquake killed more than 220,000 people and leveled much of the capital, many hope this crisis will offer the country a chance to start over and dream, only this time, with better results.

“This is a horrible trauma,” said Magali Comeau Denis, an outspoken local business owner and former minister of culture and communication, addressing the civic gathering. But, she said, “Together, we can become a force.”

At the restaurant where the civic leaders gathered in a performance area — sound equipment and drums sitting idle on a nearby stage — the air was close, even with a rainy-season breeze managing to find its way inside. The mood was militant.

The jockeying for power will do nothing for ordinary Haitians, the leaders said.

“The political solution won’t be the real solution,” Ms. Comeau Denis said. “It would not take into account the profound demands of the population.”

Nevertheless, it has appeared to be politics as usual for Haiti over the past week.

When the United States, long an outsize player in the country, sent a delegation here over the weekend, it met with the three politicians vying for power. But grass-roots activists working to improve things on the ground say they need to be part of the discussion.

Some took heart from President Biden’s call Monday for consensus. “Haiti’s political leaders need to come together for the good of the country,” Mr. Biden said.

But the civic leaders meeting on Tuesday, known as the Commission, acknowledged that they needed more time to come up with a broader consensus about where the country needs to go. They have already consulted with more than 100 grass-roots organizations, and envision holding a series of forums around the country to solicit views.

They agree on some priorities.

Alarmed by Haiti’s entrenched corruption, the activists want steps taken about allegations that money from a Venezuela-sponsored oil program, PetroCaribe, has gone astray. Three damning reports by the country’s Superior Court of Auditors and Administrative Disputes revealed in detail that much of the $2 billion lent to Haiti as part of the program had been embezzled or wasted over eight years by a succession of Haitian governments.

A week after the country awoke to the dizzying news of the president’s assassination, the capital remains in fear and shock.

By day the streets are once again clogged with weaving motorcycle taxis and tap-taps, local buses made from converted pickup trucks. Night is an entirely other matter.

As dusk fell Monday evening, Port-au-Prince was enveloped in darkness, looking more like the countryside than a teeming city jammed of more than one million people. The city was experiencing another power outage, an increasingly common occurrence that Mr. Moïse had promised, and failed, to fix.

The normally bustling, chaotic streets were barren of life.

Many of those who could be seen were lined up at gas stations. The city’s warring gangs had essentially shut down one of the country’s main highways, separating the city from its main gas reserves and causing fuel shortages.

On Tuesday, a group of people begging sat against the gate of the graceful St. Pierre church. The church is just across the square from the police station, where many of the suspects in the assassination were brought, and where crowds gathered last week to angrily demand justice.

“Our heart is broken, he has vanished,” Dorecelie Marie Arselian, 75, said of Mr. Moïse. She was wearing a large straw hat and watching barefoot children nearby scarf down pasta that had been delivered by good Samaritans.

In her life, Ms. Arselian has suffered unimaginable heartbreak. In 2010, three of her six children were crushed to death in their home in a downtown slum during the earthquake.

Perhaps that is why she wanted Mr. Moise to have a big funeral, despite the fact that the money could go to food, schools, hospitals — all things she has lacked.

“Even if we disagreed and thought he should be out of office,” she said, “this is a former president who died, and there is respect for the office.”

On Tuesday, the interim prime minister, Claude Joseph — who after the assassination immediately said he was in charge of the government, despite contentions that he had no authority to do so — announced that a committee would plan a state funeral for Mr. Moïse “with the respect, solemnity and dignity attached to his rank as head of state.” He offered no dates, and paused for no questions.

Haiti’s government has declared 15 days of national mourning. In an order, it called for the national flag to be flown at half-staff, and for nightclubs and other establishments to remain closed. It invited radio and television stations to program suitable music.

In Haiti, white is the color of mourning, and white was the color of Ms. Clesca’s garb as she met with her fellow activists on Tuesday. But that was coincidence, she said, and not done to mark Mr. Moïse’s death.

She did wear white for two full years after her mother died in 2016.

“One of the things she always said was, “Will I die and not see a better Haiti?” Ms. Clesca recalled. “Now my biggest fear is what will happen to my children. What is going to happen to Haiti? We’ve got to fight. That’s the only country we have.”