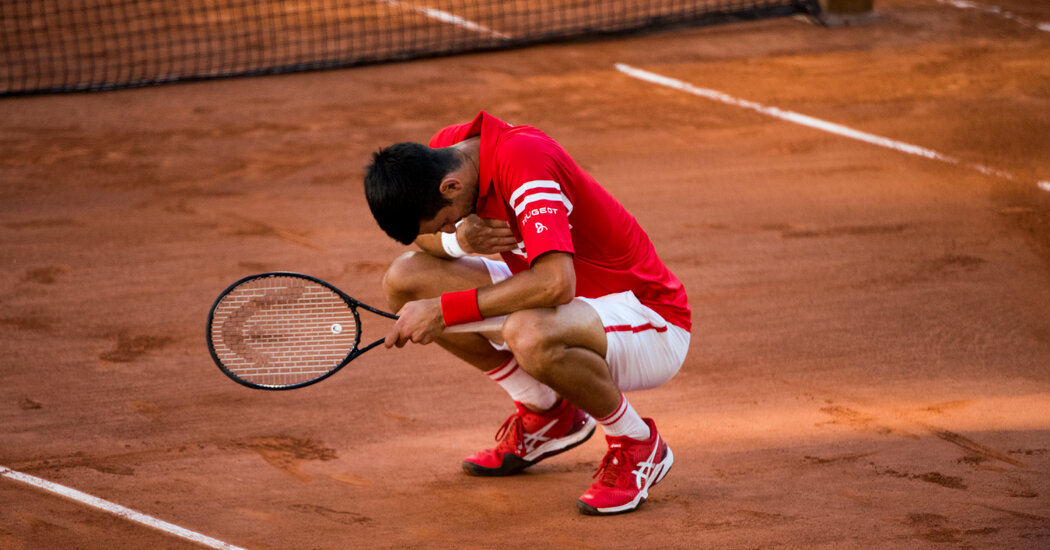 No complexes. No playing it cool.

“I’ve achieved some things that a lot of people thought it would not be possible for me to achieve,” he said Sunday after winning his second French Open.

The odds were stacked against him from the start of his journey. His family were ski racers, not tennis players, and lacked the means to finance his career without considerable sacrifice. He grew up in Serbia in a time of conflict, when Serbia was an international pariah and traveling outside the country was a challenge.

He still left home — for the first time at age 12 — and found a path to the top of a brutally competitive global sport. Perhaps more remarkably, he has endured at the top.

He first reached No. 1 on July 4, 2011. Nearly 10 years later, he is amid another extended reign at No. 1 and to watch him think on his feet (or fly through the air with his elastic limbs) is to observe a form of tennis genius. His game is not as smooth and artful as Roger Federer’s. His point-by-point tenacity is not as obvious as Rafael Nadal’s. But he is the complete package, with no weaknesses other than an intermittently shaky overhead. He has become the sport’s most steely-eyed competitor, and while watching him ward off danger and big deficits, it is easy to forget that he was once considered a player without staying power, prone to midmatch retirements.

Now, he is the one in everybody else’s head, and that could be helpful as he pursues, at the same time, the men’s record for Grand Slam singles titles and a so-called Golden Slam.

After winning in Paris, he is just one major singles title behind Federer and Nadal’s 20. But the chase that will generate bigger buzz is Djokovic’s attempt at age 34 to win all four Grand Slam singles titles and the Olympic singles gold medal in the same calendar year.

“He is so amazingly great that it would not surprise me, but it’s a perfect game in progress, so it’s difficult to talk about,” said Brad Gilbert, the coach and ESPN analyst, using a baseball analogy.

Steffi Graf is the only player to have completed a Golden Slam. But Djokovic now has a chance to make his own run after winning the Australian Open and the French Open this year.

Wimbledon, which starts on June 28 in London, is the next target. The Olympics in Tokyo and the U.S. Open in New York will follow.

“Everything is possible,” Djokovic said. “And I did put myself in a good position to go for the Golden Slam, but I was in this position in 2016, as well. It ended up in a third-round loss in Wimbledon.”

That defeat was a shock. When Wimbledon began in 2016, Djokovic had won four straight majors, although not in the same calendar year, and had just won the French Open for the first time. But he ran into Sam Querrey in the third round at the All England Club. Querrey, a tall and big-serving American who thrives on grass, upset him in a match that lasted two days because of rain delays.

“If Novak is not the best returner of all time, he’s on the very, very short list,” said Craig Boynton, Querrey’s coach at the time, in an interview on Monday. “But from the start of that match, he just couldn’t read Sam’s serve, and Sam was hitting line after line.”

Querrey won the first set in a tiebreaker and then rolled through the second set before play was suspended because of darkness. As this year’s French Open proved once more, Djokovic is adept at using off-court breaks to change the flow of a match. Against Querrey, he did the same, returning after a night’s sleep to win the third set but then failed to serve out the fourth. Querrey rallied to finish him off. Djokovic then went into a tailspin from which he did not emerge until the spring of 2018.

Tennis remains a game of momentum. If Djokovic defended his 2019 title at Wimbledon — last year’s tournament was canceled — and lost at the Olympics, he would still have a chance at the Grand Slam heading into the U.S. Open. Only two men have achieved a Grand Slam in singles: Don Budge of the United States in 1938 and Rod Laver of Australia in 1962 and 1969.

No man has come close since then, although Serena Williams came within two matches of achieving it in 2015 before being upset in the semifinals of the U.S. Open by Roberta Vinci.

“It gets more and more interesting as it builds,” Boynton said of a Grand Slam. “You saw what happened with Serena. She’s human. We’re all human, and so is Novak. I would think he would be able to handle it, but you just never know. You never know what stumbling block is right around the corner. Novak is making it look easy right now, but I’m telling you, it’s just not that easy.”

Djokovic actually has not made it look easy over the last two months. He lost early in Monte Carlo and at the first of two tournaments in Belgrade, then fought his way through two tough matches before losing to Nadal in the final of the Italian Open. After winning the second tournament in Belgrade against a low-grade field, he came to Paris feeling better about his game but still had to overcome two-set deficits twice at Roland Garros and also had to play one of the matches of his life to defeat Nadal in a four-set semifinal.

There was also the extended scream he let rip after his quarterfinal victory over Matteo Berrettini that spoke volumes about the state of his inner peace. But Djokovic can change his mood as quickly as he changes directions on a tennis court. He has learned how to turn a negative into a positive, imagining that when fans chant Federer’s or some other opponents’ name they are actually cheering “Novak.”

On Sunday, in the final against Stefanos Tsitsipas, Djokovic had pockets of support but the majority of the 5,000 fans were pulling for the newcomer. Djokovic still prevailed, draining some of the suspense from his comeback from two sets down by going up a break early in all three of the final sets.

When it was over, he went to the side of the court and spoke with a boy in the front row, embracing him and giving him the racket he had used to close out the victory.

“He was in my ear the entire match basically, especially when I was two sets to love down,” Djokovic explained when I asked him about it. “He was actually giving me tactics, as well. He was like, ‘Hold your serve, get an easy first ball, then dictate, go to his backhand.’ He was coaching me literally. I found that very cute, very nice.”

Leave it to Djokovic, an expert at blocking out the static and focusing on the essential, to hear one of the few voices in a big crowd wishing him well.

That skill could come in handy as he chases history.