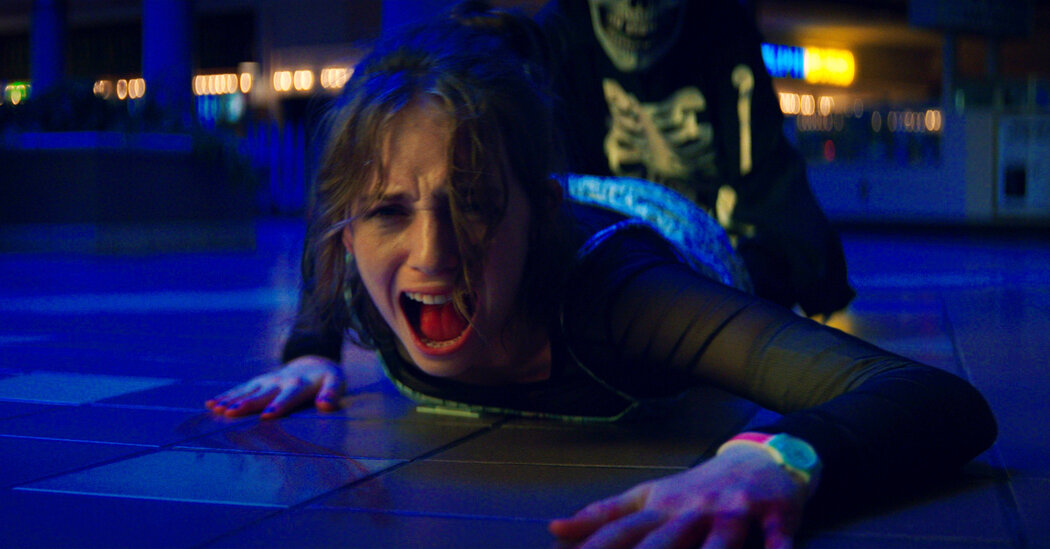 It’s crunchtime for Leigh Janiak. The writer-director is less than two months away from her Netflix debut, and she’s mixing sound and reviewing special effects with a clock ticking in the background. Only her process is moving at a much more harried pace than usual, since Janiak, as the director of the “Fear Street” trilogy, is trying to finish three movies at once. When she does, she and her producers at Chernin Entertainment will try an experiment with Netflix: For the first time, the streamer will release a movie weekly three Fridays in a row, beginning July 2.

“It’s kind of a hybrid. It’s kind of a new thing,” Janiak said. “It’s a mix between a traditional movie and what would be considered traditional TV: Each installment, each part, tells its own story but it’s also very connected to the next piece. That is a very exciting thing for me as a filmmaker.”

It’s also quite ambitious. The three movies, based on R.L. Stine books, span some 300 years and star a who’s who of today’s brightest young talent: Sadie Sink from “Stranger Things,” Kiana Madeira from “Trinkets” and Chiara Aurelia from “Cruel Summer.” All three films, budgeted around $20 million each, connect around a 300-year-old incident that’s been terrorizing the fictional Shadyside, Ohio for generations.

The first film takes place in 1994 and is heavy on mall culture and early AOL chats while paying homage to the “Scream” movies and “I Know What You Did Last Summer.” The second film is set at a summer camp in the year 1978 — think short shorts and color wars — and references both “Friday the 13th” and “Halloween.” Janiak said her shooting style for the third film, set in 1666, was inspired by Terrence Malick’s “The New World.”

Netflix introduced television bingeing in 2013 when it dropped the entire season of “House of Cards” at once. This weekly experiment represents a similar approach, one that, if it works, could make movies as sticky and as valuable as the television series the streamer is known for.

A weekly schedule “is the sweet spot where it gives enough space and time for each of the films to stand independently on their own,” said Lisa Nishimura, Netflix’s vice president of independent film and documentary features. The hope is that the trilogy will start a cultural conversation. “Leigh’s created these worlds and these characters that you really fall in love with. So the ability to, in a week, come with the next film that continues the story, gives audiences a wonderful kind of interlocking of narratives that they will want to stay inside of and be deeply engaged with.”

The experiment is only possible because it was designed this way from the outset.

20th Century Fox, before being bought by Disney, acquired the beloved teenage-centric series back in 2015 for Chernin Entertainment to produce. (Kori Adelson, an executive producer on the films and a Chernin executive got the ball rolling on the overall deal via a series of direct tweets sent to the author.)

The multimillion dollar purchase — Stine wrote 52 books set in Shadyside, selling more than 100 million copies — meant that the producers needed to think differently about how to exploit the source material. One film at a time wasn’t an efficient option.

Instead, the producers created a writers’ room, a practice common for television but one rarely used in film. Because the company had ambitions for a franchise from the beginning, the thinking was that a group of writers could “break” the entire story over a series of movies. Writers worked together both before Janiak came aboard and after she was involved.

“We were not hiring one person to do one movie,” Chernin Entertainment’s chief executive, Peter Chernin, said in an interview. “We were really trying to think about how do we build a movie world where we could do multiple movies.”

Once the world was created and the scripts were complete, Janiak, 41, shot all three films at once — a tremendous endeavor for any filmmaker to take on. For Janiak, this was only her second feature project, after her 2014 debut, the horror film “Honeymoon,” brought her to Hollywood’s attention. She filmed for 106 days, mostly at night, in Atlanta, toggling between three different time periods with three different shooting styles. She also spent a great deal of time remembering what initially drew her to the “Fear Street” series while growing up in Ohio.

“I think as a teenage girl, you kind of already live in this world that’s a little dangerous,” she said. “‘Fear Street’ was like my world but crazier, more terrible and more bloody.”

Janiak was also looking to subvert the horror genre she loves by focusing more on misfits and outsiders, the frequent heroes of Stine’s series.

“Our characters normally wouldn’t have lived past the first 15 minutes” of a traditional horror film, Janiak added. “Our movies are telling the stories of the perpetual outsiders.”

Chernin, the former president and chief operating officer of News Corp., has long prided himself for taking big shots. He mentioned “Avatar” and “Titanic” as two of the biggest bets he made while overseeing 20th Century Fox. When the studio bought “Fear Street,” the movie business was already challenged. This was years before the pandemic, but more people were already staying home and bingeing Netflix, only venturing to theaters for a blockbuster franchise while horror movies were coming out at such a rapid pace you couldn’t tell an “Annabelle” from a “Chucky.”

“Fear Street” as a movie concept, he believed, could solve many of those issues. It appealed to a broad base of both teenagers and fans of the books, audiences now in their 20s and 30s who often clamor for nostalgic fare. It has an unlimited number of stories that can be adapted; think a “Fear Street” universe akin to Marvel’s. And if made and marketed at the right pace, it could become the next big thing. Disney became the owner of the “Fear Street” trilogy when it acquired Fox in 2019. It agreed to sell the franchise to Netflix in August 2020.

“Binge viewing, led by Netflix, had clearly come to dominate television and it changed the way people thought about content,” Chernin said. “The idea of having a binge-viewing movie event seemed exciting to me.”

Three movies in three weeks meant Janiak could include clues in each film that would only be understood after watching all three movies. Netflix is certain the Easter eggs will encourage audiences to return to the trilogy again and again — the very definition of sticky content.

Take Nishimura’s experience: “When I finished watching Part 3, the only thing I wanted to do was to start all over again and watch Part 1, and I saw something different because I had the opportunity to experience the totality of the mythologies,” she said. “So I anticipate that once all three of the films are in the world, there’s going to be a lot of chatter around the things that they get to discover.”