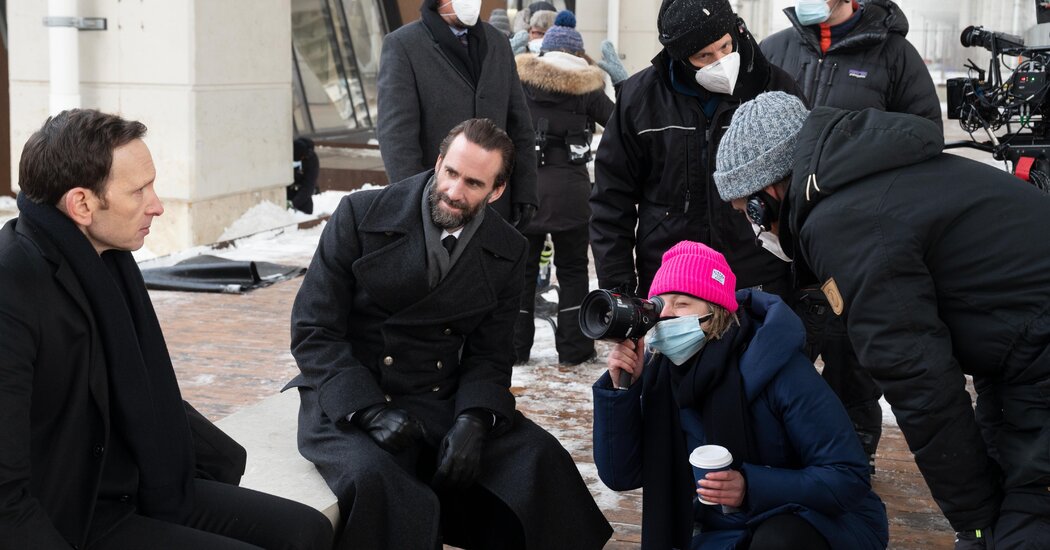 This interview contains spoilers through Episode 9 of Season 4 of “The Handmaid’s Tale.”

Elisabeth Moss was already the star and an executive producer on “The Handmaid’s Tale.” But this season, she also became a director, helming three episodes that display a flair for visual language. (The last of them, Episode 9, debuted Wednesday on Hulu.)

In Episode 3, Moss staged a gripping and largely wordless escape, with only two Handmaids surviving the attempt. In Episode 8 last week, she revealed with subtle, impressionistic glimpses that a character had hanged herself. And in this week’s episode, she alluded to the Last Supper in her presentation of the Aunts, perhaps hinting at a coming betrayal.

Although those episodes marked Moss’s official directorial debut, she first stepped behind the camera several years ago while shooting Alex Ross Perry’s 2015 indie film “Queen of Earth,” which she also produced. Moss and Perry, a frequent collaborator, traded off directing duties for part of one scene, which was enough to pique the actress’s interest in expanding her career.

“I mean, we were just joking around,” Moss said by phone recently. “But it was actually the first time that I was like: ‘Ooh. I like this. This is fun.’”

She didn’t have a master plan at the time for how to keep doing it, so she started by observing directors she knew more closely. While shooting “Top of the Lake: China Girl” (2017), she looked to the writer and director Jane Campion (“The Piano”) as a mentor and a role model for running a set. One of Campion’s secrets was keeping calm.

“She’s always taught me that it’s a very important part of directing,” Moss said. “If a director starts yelling, if a director seems anxious, stressed, or like they don’t know what they’re doing, everyone on set feels it.”

Moss also sought advice from directors she worked with (Wes Anderson on “The French Dispatch,” Taika Waititi on the forthcoming “Next Goal Wins”) or otherwise encountered (Martin Scorsese, when he moderated a panel for her most recent film, “Shirley”).

“Of course if I’ve got Martin Scorsese on the line, I’m going to ask him for directing advice!” Moss said with a laugh.

Season 4 of “The Handmaid’s Tale” finally presented an opportunity. As she prepared, she solicited advice from frequent “Handmaid’s Tale” directors like Daina Reid and Mike Barker, who had done so much to establish the show’s mood and aesthetic. And she started thinking about how she might direct herself — how to think about her character, June, as a director, not only as the actress playing her.

Calling last week from Chicago, where she is executive producing, directing and starring in a new Apple TV+ series called “Shining Girls,” Moss discussed her new responsibilities and creative contributions. These are edited excerpts from the conversation.

How did “The Handmaid’s Tale” enable your directing debut?

It felt like, OK, if I’m going to do this, it should be on something that I know very, very well. I’m hyper-involved in every element of that show as an executive producer and as an actor, so it felt like something that was organic and would have the best chance for success. We thought about having me direct in Season 3, but it just ended up being too difficult. I actually was the one who pulled the plug on it, because I put on my E.P. hat and was like, “This isn’t working for the show.” I have very few days on “The Handmaid’s Tale” where I’m not on set as an actor, and for my first episode as a director, we really wanted to make sure we had enough prep time.

By Season 4, we were like, “Well, now is the time.” We were able to shoot my first episode in the first block, and then two days into it, we had the pandemic shutdown, so I was able to think about it for six more months. When we came back, I volunteered to direct another block of two episodes.

How did the advice you solicited help you figure out who you are as a director?

Something I heard a lot about was that directing is done in prep. By the time you get to set, you should have it almost shot in your head. You should be in a place where you’re just having fun with it, exploring it with the actors and combating the million things that come up that you didn’t get to plan for. I’m paraphrasing Martin Scorsese here, but have a plan. Even if you change the plan — if you get a better idea for the actors’ blocking, or whatever — you’ve done the work: What is this thing about? What is the story I’m telling? What are the characters doing in the scene? Whose point of view is the scene from? Even if you get to set and have to change your plan, you’ve laid all that groundwork.

Join Times theater reporter Michael Paulson in conversation with Lin-Manuel Miranda, catch a performance from Shakespeare in the Park and more as we explore signs of hope in a changed city. For a year, the “Offstage” series has followed theater through a shutdown. Now we’re looking at its rebound.

I think I never realized this until I had directed a few episodes: I think like a director. I think about the edit. I think about the cut. I think about where we’re going to use which shots. I have always been aware of the more global picture of a scene or a project, as opposed to just coming in and only focusing on my lane. I’ve found it helpful to understand why we’re doing what we’re doing, why the camera is where it is, what the scene is in the story. When you are actually the director, you are able to voice the things that you are thinking about. I really enjoy that.

Were there any ideas that you weren’t sure about at first?

My director of photography, Stuart Biddlecombe, and I looked at the courtroom scene monologue in Episode 8, and we were like, “This is crazy, but God, it would be great if we could do this as just one shot.” We both looked at each other and we were like, “Do you think that could work?” We really didn’t know. There was a 10-person on-camera limit in the courtroom scene because of Covid-19 protocols, so visual effects might be involved to fill in the crowd. So we designed and shot all this coverage; we’re not stupid. But when we got into the edit, it just ended up working as one long take. It was far more impactful and emotional.

Yes! I get chills when you say that, because that’s exactly right. It was the first thing O-T and I talked about, that this is probably the most heartbreaking thing that Luke and June have ever experienced, him saying, “Go see your other man.” Terrible! Luke and June are sitting in the living room opposite each other, and there are only three shots in that scene. In ordinary circumstances, that would be considered a bit bold. The feeling that it gives you is the perfect marriage of cinematography and story. It’s not about: “This looks awesome. Aren’t we cool?” It’s about telling the story in the best way.

The romance is my fault. [Laughs.] That’s Stuart’s and my fault, completely. All we wanted to do was shoot “Moulin Rouge!” We are such romantic nerds. And like you saw in Episode 3, the Steadicam shot 360 degrees around them when they kiss? You have to rein us in. All we want to do is shoot the most romantic thing ever.

The scene in which June drives away from that reunion bears a resemblance to Diane Lane on the train in “Unfaithful.” Was that intentional?

That wasn’t a reference necessarily, but it’s a great call. That was Chris Donaldson, my editor. The jump cuts were his idea. They’re fantastic. We use that kind of thing as sparingly as possible, but it felt like the only way to show what we were trying to show, which is the elation, the joy, the love, but also the guilt and the confusion. Try to fit all that into 10 seconds or so.

Did anything make you cry at the monitor?

I would say in Episode 3, when Luke has that porch scene where he’s worried that maybe June doesn’t want to come back? That killed me! Nick in Episode 3, when he says goodbye to June. Fred Waterford’s last scene in Episode 9 with Serena (Joseph Fiennes and Yvonne Strahovski) — this man is in a position that he’s never been in before, where he actually feels love, true love, for his child that’s coming. That got me. Janine (Madeline Brewer) and Aunt Lydia (Ann Dowd) in Episode 9. They turned it up to 11. It was just extraordinary to watch Madeline and Ann both go in these directions that they hadn’t gone before. Truly, I love directing stuff that I’m not in because I get to sit and watch these guys, and they’re just so phenomenal to watch.

Parts of Dowd’s performance this season, but especially in Episode 9, seem to be laying the groundwork for the upcoming spinoff “The Testaments,” or at least linking the two shows.

The work that I did with Ann Dowd this season, as a director, definitely involved “The Testaments,” for obvious reasons. We always kept that top of mind. Even though things weren’t necessarily written into the script that were super explicit about what Aunt Lydia’s journey is ultimately going to be, Ann and I were highly aware of it and constantly looked for little moments where we could suggest it. It was something under the surface of her entire arc this season, and I think it really added an incredible layer to her performance.

There are always nine million layers to an Ann Dowd performance! Every little look, every little move, everything you could tie to what is coming, it just made it so much more interesting. I would go home at night after directing her, and just be like: “I cannot believe that I got to work with Ann Dowd in that way today. I’m the luckiest person in the world.”