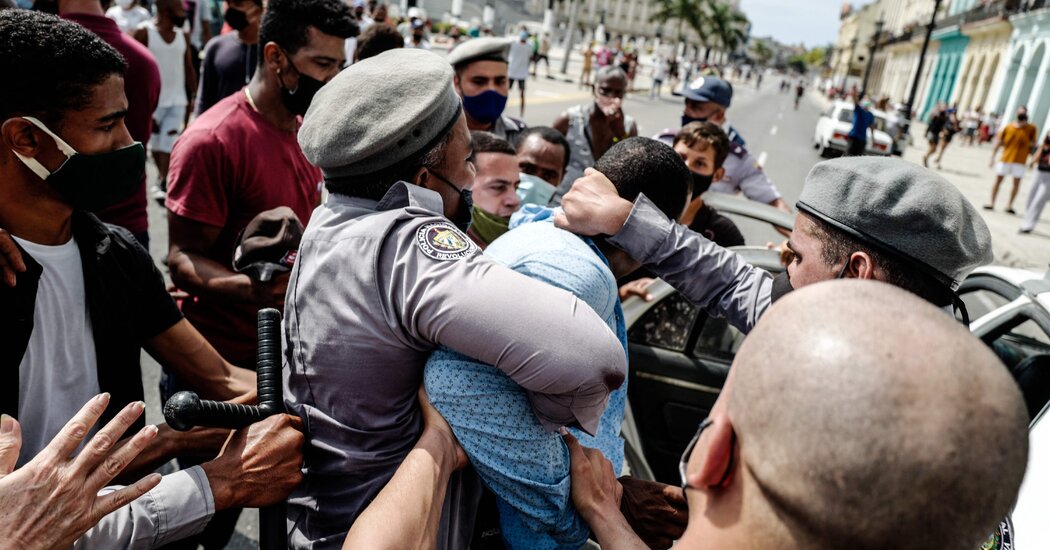 The Cuban government attributes its longstanding economic problems to the American trade embargo, which cuts off its access to financing and imports. But the pandemic has worsened conditions, and in Matanzas, east of Havana, some patients and their families have resorted to posting videos on YouTube of furious people screaming about the lack of medicine and doctors.

The Cuban Ministry of Health website says the nation of 11 million now has about 32,000 active cases of Covid-19. It reported 6,923 daily cases and 47 deaths on Sunday, breaking its prior record, set just Friday. Only about 15 percent of the population is fully vaccinated, the government said.

The protest movement gained momentum after a number of celebrities started tweeting with the hashtag #SOSCuba. Mia Khalifa, a former adult film actress with nearly four million followers on Twitter, joined in by tweeting insults directed at the president. The president’s office even responded to criticism by a Puerto Rican singer, Residente. The post was later removed.

President Miguel Díaz-Canel took office three years ago, the first time someone outside the Castro family was allowed to take the post. Raúl Castro, who had already handed over the presidency, then stepped down as the leader of the Communist Party this year.

Mr. Díaz-Canel’s term was, at first, marked by increased access to the internet, which helped fuel public discontent against him, particularly by artists.

Cuba’s foreign minister, Bruno Rodríguez, confirmed via Twitter that Mr. Díaz-Canel had rushed to San Antonio de los Baños, where the government insisted that “salaried” protesters were trying to provoke a severe reaction by the authorities.

“Celebrating what they orchestrated today in San Antonio de los Baños only uncovers the worst nature of people,” a government Twitter account quoted the president as saying.