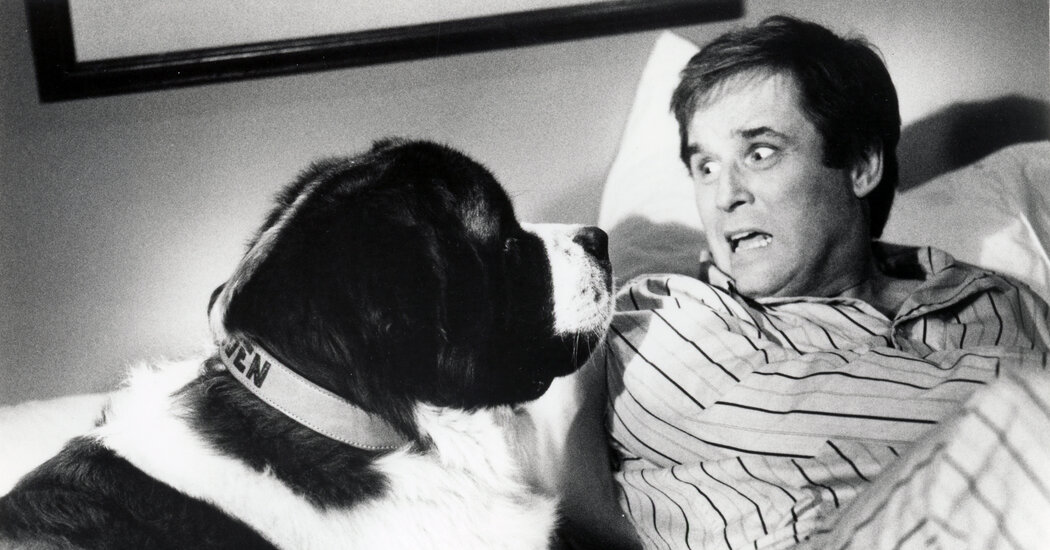 Charles Grodin, the versatile actor familiar from “Same Time, Next Year” on Broadway, popular movies like “The Heartbreak Kid,” “Midnight Run” and “Beethoven” and numerous television appearances, died on Tuesday at his home in Wilton, Conn. He was 86.

His son, Nicholas, said the cause was bone marrow cancer.

With a great sense of deadpan comedy and the kind of Everyman good looks that lend themselves to playing businessmen or curmudgeonly fathers, Mr. Grodin found plenty of work as a supporting player and the occasional lead. He also had his own talk show for a time in the 1990s and was a frequent guest on the talk shows of others, making 36 appearances on “The Tonight Show Starring Johnny Carson” and more than 40 on David Letterman’s NBC and CBS shows combined.

Mr. Grodin was a writer as well, with a number of plays and books to his credit. Though he never won a prestige acting award, he did win a writing Emmy for a 1977 Paul Simon television special, sharing it with Mr. Simon and six others.

Mr. Grodin, who dropped out of the University of Miami to pursue acting, had managed to land a smattering of stage and television roles when, in 1962, he received his first big break, landing a part in a Broadway comedy called “Tchin-Tchin,” which starred Anthony Quinn and Margaret Leighton.

“Walter Kerr called me impeccable,” Mr. Grodin wrote years later, recalling a review of the show that appeared in The New York Times. “It took a trip to the dictionary to understand he meant more than clean.”

Another Broadway appearance came in 1964 in “Absence of a Cello.” Mr. Grodin’s next two Broadway credits were as a director, of “Lovers and Other Strangers” in 1968 and “Thieves” in 1974. Then, in 1975, came a breakthrough Broadway role opposite Ellen Burstyn in Bernard Slade’s “Same Time, Next Year,” a durable two-hander about a man and woman, each married to someone else, who meet once a year in the same inn room.

“The play needs actors of grace, depth and accomplishment, and has found them in Ellen Burstyn and Charles Grodin,” Clive Barnes wrote in a rave in The Times. “Miss Burstyn is so real, so lovely and so womanly that a man wants to hug her, and you hardly notice the exquisite finesse of her acting. It is underplaying of sheer virtuosity. Mr. Grodin is every bit her equal — a monument to male insecurity, gorgeously inept, and the kind of masculine dunderhead that every decent man aspires to be.”

The show ran for three and a half years, with an ever-changing cast; the two original stars left after seven months. Mr. Grodin by that point was in demand in Hollywood. (Ms. Burstyn reprised the role in a 1978 film adaptation, but this time opposite Alan Alda in the Grodin role.)

Mr. Grodin had already appeared in Mike Nichols’s “Catch-22” in 1970 and had turned in one of his better-known film performances in the 1972 comic romance “The Heartbreak Kid,” in which he played a self-absorbed sporting goods salesman who marries in haste, immediately loses interest in his bride (Jeannie Berlin), and falls in love with another woman (Cybill Shepherd) on his honeymoon. (Elaine May, Mr. Nichols’s longtime comedy partner and Ms. Berlin’s mother, directed.)

In 1978 he had a supporting role in the Warren Beatty vehicle “Heaven Can Wait.” Another signature role was in the action comedy “Midnight Run” in 1988, in which Mr. Grodin played an accountant who has embezzled a fortune from the mob and is being pursued by a bounty hunter, played by Robert De Niro.

Though Mr. Grodin acted opposite stars like Mr. De Niro and Mr. Beatty, what may have been his best-known role found him working with a dog. The film was “Beethoven,” a family-friendly hit in 1992, and the dog was a St. Bernard. Mr. Grodin played a cranky father who did not exactly warm to the new household pet. In one memorable scene, he crawls into bed with what he thinks is his wife and is enjoying having the back of his neck licked until he realizes that the dog, not the wife, is his bedmate.

The next year he reprised the role in “Beethoven’s 2nd.” If he was frequently upstaged by the title character in these films, he took it in stride.

“I don’t complain when the editor chooses my worst take because it’s the dog’s best take,” he told The Kansas City Star when the sequel came out.

Charles Sidney Grodin was born on April 21, 1935, in Pittsburgh. His father, Ted, was a merchant who dealt in sewing notions, and his mother, Lena (Singer) Grodin, was a homemaker.

He grew up in Pittsburgh and tried the University of Pittsburgh, thinking he might want to be a journalist. But he soon rejected that idea.

“I imagined that someday an editor might tell me to ask someone who had lost a loved one how they felt,” he wrote in a 2011 essay for Backstage magazine. “I see that all the time on the news now. Not for me.”

He often said that the 1951 movie “A Place in the Sun,” which starred Elizabeth Taylor and Montgomery Clift, caused him to shift his focus to acting.

“It was two things,” he told the Television Academy Foundation in an oral history. “One is I think I developed an overwhelming crush on Elizabeth Taylor. And two, Montgomery Clift made acting look like, ‘Gee, well that looks pretty easy — just a guy talking.’”

After six months at the University of Miami, he worked at the Pittsburgh Playhouse for a year and a half, then found his way to New York. From 1956 to 1959 he studied with Uta Hagen, though he often found himself questioning her methods, which he said annoyed her.

Mr. Grodin made guest appearances on “Shane,” “The Virginian” and other 1960s TV series before landing his first significant film role, as an obstetrician, in the 1968 horror hit “Rosemary’s Baby.”

In 1976 he played an unlikable oilman in a remake of “King Kong,” with some reluctance.

“I wanted to play the love interest with Jessica Lange,” he said. “I didn’t want to be the guy responsible for the death of the most beloved animal outside of Bambi. But they wanted me for the bad guy.”

By popular demand, his character meets a gruesome end.

“The only thing they changed after the first screening, I was told, is when Kong got loose and tried to step on me and kill me and missed,” he said. “The audience was so disappointed that they had to recut it.”

Mr. Grodin showed a different side in the mid-1990s when he hosted “The Charles Grodin Show” on the cable channel CNBC.

“They brought me in there to be a humorist,” he said in the oral history, “but pretty quickly I got caught up in social issues, and the show became just as much that, if not dominantly that. Some people like it better when you’re funny, and some people prefer that you’re taking cameras up to prisons and trying to help people who shouldn’t be in prison.”

Nicholas Grodin said his father had particularly been proud of his work for the Innocence Project, the prison justice organization, and related causes, and his work for groups that help homeless people.

After his talk show ended in 1998, Mr. Grodin largely stepped away from show business for a dozen years. Then he began to take roles again, including a recurring one on “Louie,” the comedian Louis C.K.’s series.

Mr. Grodin wrote several memoirs full of anecdotes from his career, including “It Would Be So Nice if You Weren’t Here: My Journey Through Show Business” (1989) and “We’re Ready for You, Mr. Grodin: Behind the Scenes at Talk Shows, Movies and Elsewhere” (1994).

A 1985 anecdote Mr. Grodin related on Mr. Letterman’s show was typical of the breath of fresh, if offbeat, air he brought to those appearances. He told Mr. Letterman that he had been gratified when, walking through the lobby on his way to the studio, the crowd that had lined up to get into the show burst into applause.

“But,” he added, “for the moment that I thought they were applauding me, it was a lovely, lovely moment.”

He offered no explanation for the presence of the duck.