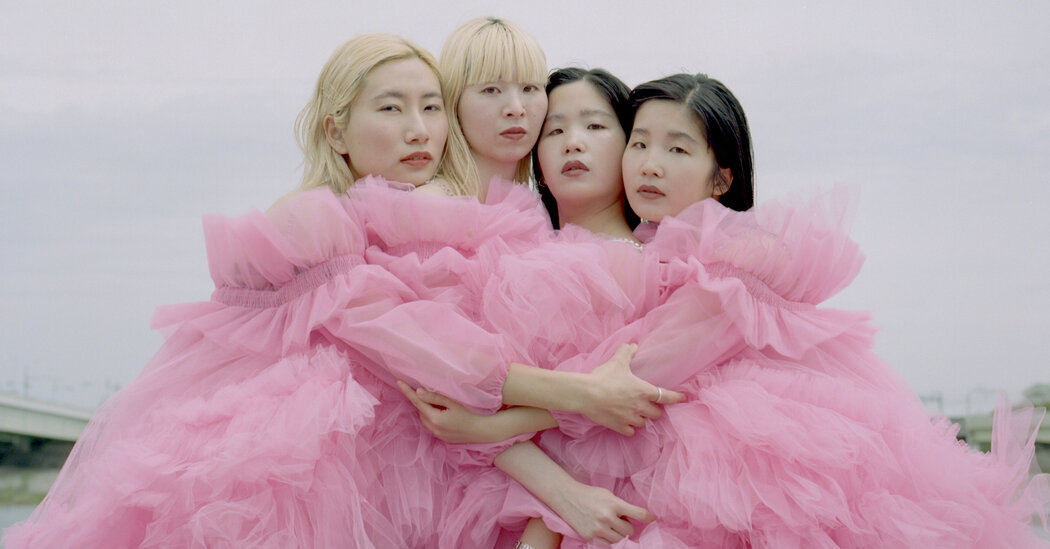 The Japanese band Chai is a professional purveyor of whimsy. In concert, its four members perform wearing an array of colorful, coordinated outfits — loads of pink, lots of orange, some reds and greens, but never black. Its lead singer and keyboardist, Mana, will sometimes deliver exuberant monologues about “Neo-Kawaii,” a band-created ethos meant to redefine modern ideals of cuteness. (The phrase translates directly to “new cute.”) The group has been known to cover Culture Club’s “Karma Chameleon.” The refrain of one of its most popular songs, “N.E.O.,” goes “You are so cute! Nice face!”

“We’ve always been kind of energetic,” Mana said in a recent video interview from Tokyo, through the band’s translator. “It’s not that we decided to just go out and be extroverts.”

That said, the band ran into a minor problem when working on the follow-up to its 2019 breakout record, “Punk”: Channeling all that energy in the studio wasn’t so easy, and its attempts to “dumb it down” weren’t very fun. “It’s actually harder for us than to go all out onstage,” Mana said.

But when the pandemic forced the group to remain in Japan rather than continue touring the world, its members found themselves with an unexpected moment to breathe. They pursued other interests — Mana started an Instagram for dog lovers; the bassist/lyricist Yuuki got into pottery — and more consciously considered the new music they wanted to make, now that they didn’t have to hunt for studio time in between global commitments.

Owing to the band’s growing debt to hip-hop, the drummer Yuna started experimenting with her playing technique in GarageBand. And Mana, who primarily drives the band’s music, worked on cultivating an album she described as “more than a human friend — someone you can go to when you’re upset, someone you go to when you’re happy, when you wake up first thing in the morning, when you want to cry.”

The result is “Wink,” out Friday, a record that doesn’t dim Chai’s enthusiasm so much as redirect it across genres and moods. Because Chai looks like a traditional four-piece band, it’s easy to see it as a rock group, when in reality its sound reflects a style-bending pool of influences. On “Wink,” the scrappiness of Chai’s early records is peeled back to reveal a dreamier collection of melodies driven by Yuna’s sprightly and varied drumming.

A song like “Nobody Knows We Are Fun” lingers in a hazy, whispered register before suddenly flowering into a chanted singalong, while “End” energetically toggles between rapping and singing. (Mana cited the R&B group TLC and the rapper Mac Miller as influences.) “Wink” will be released in Japan through Sony, but the band signed with the prestigious indie label Sub Pop — one of a handful of suitors — for its American release.

“As a listener, you never really know what to expect when you hear a new song,” said Julien Ehrlich of the band Whitney, who toured with Chai at the beginning of 2020. “It’s completely not formulaic, the way that they create things — and they’re always trying to change it, which is really exciting.”

The groundwork for Chai was laid nearly a decade ago when Mana and her twin sister, Kana, met Yuna at their high school’s music club in Nagoya. Not long after, Mana and Yuuki were introduced through mutual friends in their undergraduate program. Though Yuuki had never played an instrument before, she immediately bought into her new friend’s vision of forming a band.

“We never really had this expectation of what exactly a band is, because none of us had ever officially done it before,” she said. “But we just naturally became friends, and it kind of all shaped on its own.”

Growing up, the members of Chai hadn’t been exposed to much Western music. That changed in college, when a friend of Yuna’s made them a playlist of eclectic artists who would become formative influences: Basement Jaxx, Tune-Yards, Justice. Very quickly, the band formed a distinct identity — matching outfits, an obsession with food — and bonded over its alienation from the beauty standards of its native country.

“We didn’t fit into this definition of cute, which was considered the biggest form of accomplishment in Japan,” Mana said, while wearing a basic red T-shirt reading “Overdressed” on the front. “Once we started exchanging our insecurities, it gradually became a kind of comfort blanket.”

She pointed to their adoption of the color pink, widely considered a childish hue in Japan, as one such way of repudiating those expectations. Early on, the members also claimed they used stage names as a way of obscuring their identities. Over time they’ve admitted that Yuuki and Yuna are real names, while Mana and Kana are adopted from nicknames — it was just cooler to imagine otherwise, and definitely cooler when styled in all caps, as the band does.

While the band initially struggled to find local support, it accrued momentum with every foray out of the country. After successful appearances at South by Southwest and Pitchfork Music Festival in 2019, the members realized they were finding the audience they’d been looking for. “It’s actually really fun to get more recognition overseas, because then we can actually bring that back to Japan,” Yuuki said. “Even if they don’t understand, we can actually say ‘Hey, the world understands, so I think we’re OK with it.’”

The Devo co-founder Gerald Casale, who met the band at a 2018 show, said this sense of exclusion from contemporary music had also animated Devo’s entry into the industry. “We were reacting to just how far off-track we thought pop music had gotten, and how lame it was,” he said. He praised Chai’s “precise, architectural” stage presence, and said that he’d hoped to bring them aboard for a planned (but eventually canceled) Devo tour.

One of Chai’s more identifiable and charming traits is its lyrical preoccupation with food: “Karaage,” which analogizes young love to a hot meal, is named for Japanese-style fried chicken, while “Maybe Chocolate Chips” compares body moles to the confection in the title. Asked about this, Yuuki, who composes the band’s lyrics, said food was directly tied to the band’s mission of self love. “I feel like the first type of love you recognize is ‘what I want to eat,’” she said. “Music is important to us, but food is, too — it easily just connects for us.” (The band lives its credo: Whitney’s Ehrlich said that Chai had sought out an ice-cream parlor every day of its tour.)

Japan has pitched from one state of lockdown to another, but the band has started scheduling live concerts for the summer and beyond. Finding a way to perform these quieter songs in concert is a new challenge, as is resuming the band’s momentum, but the Chai members were sanguine about the future. “It’s because it’s the four of us that we have a special message to say,” Mana said. “We never even really consider ourselves just a band — we dance, sometimes we do D.J. sets, we do all different types of things. We consider our genre just ‘Chai.’”