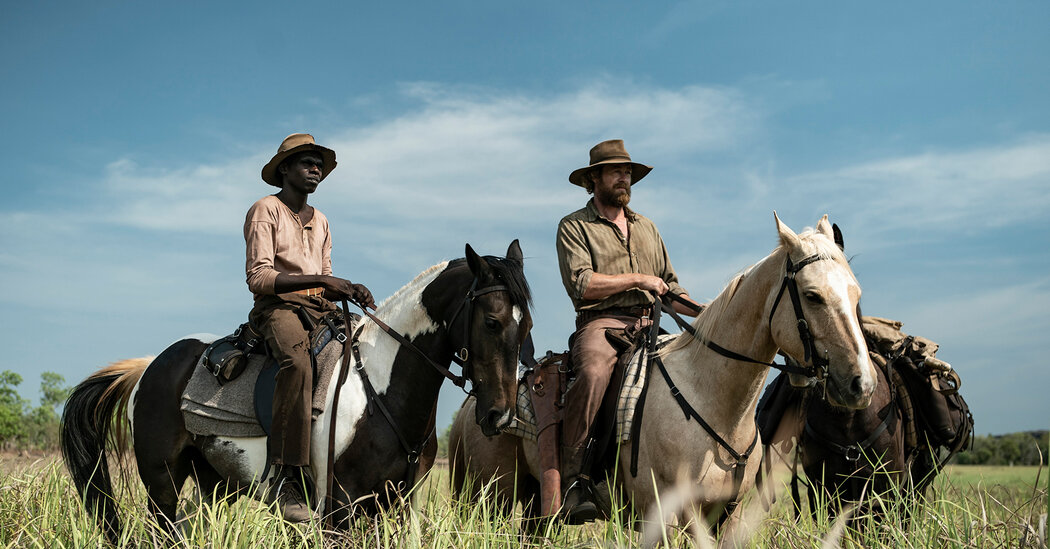 Audiences know Eric Bana as a Trojan prince, Mossad agent, time-traveling Chicago librarian, and an easily angered Berkeley scientist. But as his Hollywood career took off, rarely did they get to see the Melbourne native play an Australian.

By and large “there are just no Australian parts in any international films,” Bana said in a video interview from his home in Melbourne, adding, “When you consider the impact that Australian actors have had internationally over the last 30 years, they must be pretty used to hearing our voices — because we’ve done a lot of talk shows.”

Even in Australia, audiences tend to flock to the latest imported Hollywood releases over films made in and about their own nation. But in February, for reportedly the first time in the country’s box-office history, the top three films were all Australian. Two of those — “The Dry,” starring and produced by Bana, and “High Ground,” with Simon Baker — are receiving American releases this month, while the Naomi Watts-led “Penguin Bloom” premiered globally on Netflix in January.

It’s been decades since “The Adventures of Priscilla, Queen of the Desert” and “Muriel’s Wedding” had a similar joint domestic theatrical coup in 1994, and even longer since “Crocodile Dundee” became the country’s biggest commercial smash, a record it still holds.

“We have the double whammy. We get all the American content, plus we’ve got huge connections to the U.K., so we watch all the British stuff, too,” said Graeme Mason, chief executive of Screen Australia, the government agency in charge of supporting local film and television production. “It puts a real strain on Australian stuff to cut through in cinemas.”

But then came the pandemic. As Hollywood studios delayed many of their blockbusters, they left room for Australian productions to capture ticket sales in a country with relatively few coronavirus cases. Still, it wasn’t a given that audiences would show up.

Baker, the actor, who is based in New South Wales, believes “Australians have a little bit of a cultural cringe with seeing their own accent on the screen” and “an inferiority complex,” he said. “People have said to me, ‘Oh, yeah, I saw this movie the other day. You should see it. I am going to warn you, though, it is Australian.’”

Additionally, Australia’s strict Covid-19 containment measures, which have included border closures, rolling lockdowns and widespread contact tracing, meant many residents were hesitant to return to theaters despite the risk of community transmission being extremely low in most areas. “We did need to remind them that they could go to the cinema and go safely,” Mason said.

In the weeks leading up to the releases of “The Dry,” “High Ground,” “Penguin Bloom” and the Indigenous dance documentary “Firestarter: The Story of Bangarra,” Screen Australia and local distributors mounted a widespread campaign to encourage audiences to venture back to theaters and support Australian films. Their efforts paid off.

“The Dry,” based on the Australian author Jane Harper’s best-selling 2017 novel about a Melbourne detective who returns to his small hometown in the aftermath of a grisly crime, has grossed more than $16 million American at the country’s box office following its January debut. That puts it in the top 15 highest-grossing Australian movies of all time domestically.

Filming across more than a dozen small towns in the state of Victoria in 2019, Bana and the director, Robert Connolly, worked closely with local communities to highlight the realities of life in regional Australia, which was then grappling with a drought and historic bushfires. When the town inns ran out of rooms to house crew members, residents welcomed them into their homes.

“I always felt like the only chance we had of reaching an American audience was by the film being successful in its homeland,” Bana said. “And for it to work for Australians, it had to just be really true and authentic.”

Bruna Papandrea, whose Made Up Stories banner produced the adaptations of both “The Dry” and “Penguin Bloom,” said there was no way “The Dry” could have been Americanized in the way the Australian author Liane Moriarty’s “Big Little Lies” and “Nine Perfect Strangers” were reset as series, which she also produced.

“The landscape was such a massive character in ‘The Dry,’” she said. “It’s not to say that couldn’t have been California, because I think California climate-wise does mimic Australia in so many ways. But it wasn’t a consideration for me to reset it. I didn’t even raise it.”

She hopes viewers of “The Dry” (in theaters and on demand) get a different understanding of the country. “Everyone thinks there are kangaroos running around in the streets here. Which, by the way, sometimes there are,” she said. “But one of the reasons I really want ‘The Dry’ to work internationally is it breaks down that idea of what people perceive to be an Australian film.”

While the pandemic has seen a rash of overseas projects (and celebrities) arrive on Australia’s shores, like Marvel’s “Thor: Love and Thunder” and the forthcoming Julia Roberts-George Clooney rom-com “Ticket to Paradise,” many are set elsewhere and star non-Australians.

Baz Luhrmann’s Elvis Presley biopic, which co-stars Tom Hanks, wrapped production earlier this year in Queensland. That film, like past locally shot hits “Moulin Rouge,” “The Great Gatsby” and “Babe,” is technically considered “Australian” because it features Australians in top creative roles, Mason said — even though audiences might not see an obvious connection onscreen. Meanwhile, George Miller’s “Mad Max” prequel, “Furiosa,” will begin production in New South Wales in June. The state premier, Gladys Berejiklian, touted it as “the biggest ever film to be made in Australia” in a tweet, saying it would support more than 850 local jobs and bring the equivalent of more than $272 million U.S. to the economy.

“I’m not telling a painter what they should paint on the canvas,” Mason said. “But we would like the majority of the slate to reflect Australians back to themselves and out to the world.”

Both “Furiosa” and the Elvis film qualified for the government’s Producer Offset, which provides a 40 percent tax rebate for films that meet certain criteria, including shooting location, filmmaker nationality or subject matter. Movies like “The Dry” and “High Ground’‘ were also dependent on that offset, and a motion to reduce the rebate to 30 percent earlier this year was met with swift backlash.

“‘The Dry’ would not have been made without that extra 10 percent,” Papandrea said. “We put every cent we had into it. There are a lot of forces that have come into play to hopefully make this a monumental moment for Australian cinema and show the importance of maintaining our own stories.”

Baker has also been intent on putting the spotlight back on those Australian stories. After spending more than two decades in the United States, starring in “The Mentalist” on TV and appearing in “The Devil Wears Prada” and other films, he moved back to Australia five years ago. He has largely shifted his focus to local projects, including “High Ground” (available on demand).

Filmed in the country’s Northern Territory in collaboration with First Nations communities, the fictionalized story paints a harrowing picture of the real-life massacres of Indigenous people by white settlers and policemen in the early 1900s. The director Stephen Johnson has said it took more than 20 years to get “High Ground” made, in part because of its subject matter.

Baker said there’s a hesitancy about seeing Indigenous history onscreen that comes from the “shame” white Australians feel over colonial atrocities. And following the film’s January theatrical release domestically, some viewers were incredulous that the gruesome events could be based in reality, said Witiyana Marika, a leader of the Rirratjingu people who produced and co-stars.

“There was lots of confronting and questioning and saying, ‘Is this true? Is this what happened here in Australia?’” Marika said. “People thought it didn’t happen in their own backyard.”

That disbelief underscores the importance of putting an array of Australian stories onscreen. Asian-Australian actors, for instance, are vastly underrepresented, and performers like Chris Pang (“Crazy Rich Asians”) have been outspoken about the lack of opportunities, which has driven them to pursue careers overseas instead.

Baker supports the Make It Australian campaign, which is urging the government to require streaming services like Netflix and Amazon Prime to commit to spending at least 20 percent of their local revenue on original Australian content.

“We are a storytelling nation,” Baker said. “That’s in the DNA of this place long before the English landed on the shore. I think we can strike a balance where we can try to stimulate the economy with overseas production coming in, but also protect local content, protect the cultural significance of local stories.”

Still, the nature of the Australian film industry is likely to shift again post-pandemic. Bana predicted “an exodus” of international talent back to Los Angeles, while Mason acknowledged that it was unlikely that Australian movies would regularly take over the box office.

“I’m not foolish,” Mason said. “When Marvel and James Bond start coming back, they will still be the big popcorn moments. But I think this is a moment to remind us that we can make great stories that Australians want to see and the world wants to see. We need to make more of those.”