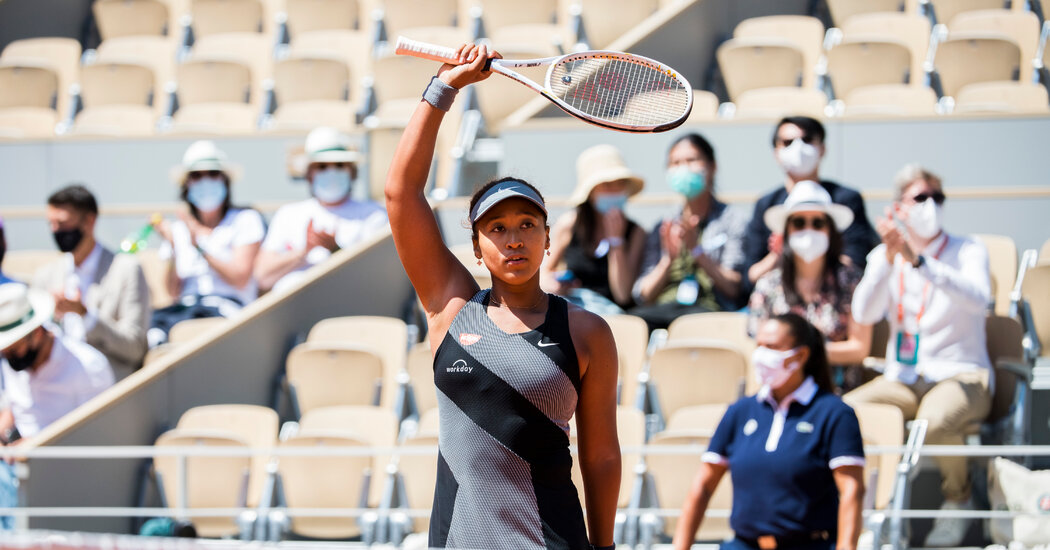 PARIS — Naomi Osaka’s withdrawal from the French Open was not the outcome anyone in tennis desired, and yet it happened just the same.

It could likely have been avoided through better communication and smarter decisions, but on Monday night the sport’s most prominent young star felt she had no better option than to pull out of the year’s second Grand Slam tournament.

Her second-round match with Ana Bogdan will be a walkover for Bogdan instead of another chance for the second-ranked Osaka, 23, to make steps forward on red clay, a surface that has long bedeviled her.

“Above all, it’s just really sad: for her, for the tournament, for the sport,” said Martina Navratilova, a former No. 1 who has seen plenty of tennis turmoil in her 50 years in the game. “She tried to sidestep or lessen a problem for herself and instead she just made it much bigger than it was in the first place.”

It is not wise at this stage to speculate on the full scope of Osaka’s issues. She is still coming to grips with them herself, and she said in her withdrawal announcement on social media that she had experienced long bouts of depression since the 2018 United States Open that she won by defeating Serena Williams in a tumultuous final.

What is clear is that the catalyst in Paris, if only the catalyst, was one of professional sport’s staples: the news conference.

Osaka, citing her mental health, announced ahead of the tournament that she would not “do any press” during the French Open. News conferences are required at the Grand Slams for players who are requested, and Osaka was the first tennis star to make it clear that she intended to break the rule for as long as she was in the tournament.

Her announcement on social media caught the French Open organizers and sport’s leadership by surprise. That was her first misjudgment. Her next was failing to be accessible when those tennis leaders justifiably sought more information.

Gilles Moretton, the new French Tennis Federation president, and others repeatedly tried to speak with her without success.

When she did indeed skip the news conference after her first-round victory on Sunday over Patricia Maria Tig, the French Open fined her $15,000 and the Grand Slam tournament chiefs made it clear that she risked being defaulted from the tournament and future Grand Slam tournaments if she continued to decline to fulfill her media duties.

It was a hard line: too hard in light of what Osaka explained on Monday night. “I feel for her, and I feel the sport in general has mishandled this,” said Pam Shriver, a former leading player and president of the WTA Tour Players Association. “I just feel that Grand Slam statement poured fuel on the flames in a way that was irreversible. I feel they should have kept their views and efforts quiet, not made them public, and worked behind the scenes. All the more so because the pandemic is still the elephant in the room and has been so hard on so many young people.”

Depression is more common in sports than many would expect. The problem was that Osaka did not offer tennis’s leaders that explanation — in public or apparently in private — until Monday night.

Considering Osaka’s prominence and the increased awareness of and sensitivity to athletes’ mental-health challenges, it is hard to imagine that Moretton or the other Grand Slam leaders would not have tried to work with her to find a more conciliatory short-term solution if they had been given a clearer picture.

Instead, they were left too long in the dark: with Osaka focusing her pretournament complaints on reforming the sport’s player-media model, citing overly repetitive questions and lines of inquiry that made her doubt herself. There are perhaps better ways for professional journalists to find out more about tennis players and their matches.

Tennis champions and would-be champions have been dealing with such challenges in the interview room for decades and if Osaka is sensitive to questions about her weaknesses on clay, imagine how Pete Sampras felt when he was asked about his own failings for more than a decade as he tried and failed to win Roland Garros.

And yet he kept showing up for news conferences and chasing the prize, just as Jana Novotna did at Wimbledon before finally winning the singles title in 1998.

As Billie Jean King likes to say, pressure is a privilege, and repetitive questions are an inconvenience but also a reflection of legitimate public interest. Media coverage, much of it favorable, has helped Osaka become the world’s best paid female athlete. She earned more than $55 million in the last year, nearly all of it from sponsorship deals.

That brings its own new pressures. “She has lots on her back,” said Marin Cilic, the Croatian men’s star who once broke down in the middle of a Wimbledon final.

But facing unwelcome questions, even in defeat, does not seem like too much to ask. “No comment” or a more polite demurral remain legitimate options. But one of the takeaways from l’affaire Osaka may be the realization that some players really do find it all too much to bear (and it did not go unnoticed that Moretton took no questions at his own short news conference on Monday night). The debate will be, how much special treatment should such players receive?

One of the reasons for the Grand Slam tournaments’ hard line with Osaka was the desire for fairness.

“I think Naomi has always struggled with public speaking and dealing with the press has always made her anxious and so it’s finally come to a head,” said Rennae Stubbs, a former No. 1 doubles player who is now a tour-level coach and ESPN analyst. “You cannot allow a player to have an unfair advantage by not doing post-match press. It’s time consuming, so if one player is not doing that and others are, that is not equal. But after this, it’s time to really take a hard, long look at all of it.”

Williams was sympathetic after her first-round victory in Paris on Monday.

“I feel for Naomi,” she said. “I feel like I wish I could give her a hug because I know what it’s like. I’ve been in those positions. We have different personalities, and people are different.”

“I’m thick,” Williams said, possibly referring to being thick-skinned. “Other people are thin. Everyone is different, and everyone handles things differently. You just have to let her handle it the way she wants to, in the best way she thinks she can.”

That is a fine sentiment, but it is also important to learn when things go awry. It seems clear that if this unfortunate situation had been handled differently from the start, Osaka would not have felt she had become too much of a distraction and would be getting ready for round two in Paris instead of packing her bags, unsure of when she will play next with Wimbledon starting in less than a month.

But the underlying issues that Osaka faces would likely have remained.

“The bottom line is that this is about more than talking to the press,” Navratilova said. “This goes much deeper than that, and we have no way of knowing, nor should we speculate, just how deep it does go.”