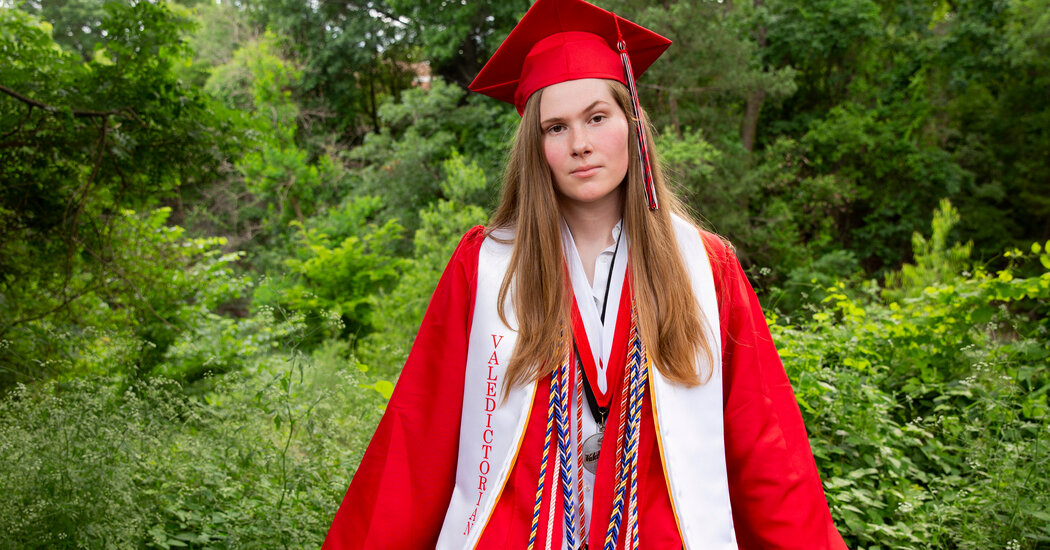 Paxton Smith, the valedictorian at her Dallas high school, had planned to deliver a speech about the news media at her graduation. But when she got onstage at Lake Highlands High School on Sunday, she instead used her three minutes at the podium to address what she saw as a greater issue: the new abortion law in Texas.

A video of the speech was widely shared online, drawing international headlines and turning Ms. Smith into an online sensation, at least on one side of the abortion divide, with prominent opponents of the law amplifying her message. “This took guts,” Hillary Clinton tweeted. “Thank you for not staying silent, Paxton.”

“How sad Paxton has bought the lie that women have to eradicated unplanned pregnancies to achieve dreams and goals,” Amy O’Donnell, a spokeswoman for the Texas Alliance for Life, said on Twitter. “Women can give life to their babies AND do great things.”

The law, which goes into effect on Sept. 1, bans abortions after six weeks of pregnancy, regardless of whether the pregnancy was a result of rape or incest. The legislation, also known as the “heartbeat law,” is among the most restrictive abortion measures in the country.

Facing what appeared to be a crowd of thousands, including students, families and administrators, gathered at her school’s football stadium, Ms. Smith, 18, spoke out against the law and the impact she said it would have on women, saying that a “decision that will affect the rest of their lives” had been “made by a stranger.”

“I have dreams and hopes and ambitions. Every girl graduating today does,” she said. “And we have spent our entire lives working toward our future, and without our input and without our consent, our control over that future has been stripped away from us.”

Ms. Smith said in an interview that, as she was speaking, she noticed a woman at the side of the stage “aggressively” signaling for her microphone to be cut off. It was not.

The Richardson Independent School District said in a statement that it would review student speech protocols before graduation ceremonies next year.

“The content of each student speaker’s message is the private, voluntary expression of the individual student and does not reflect the endorsement, sponsorship, position or expression of the District or its employees,” it said, according to The Associated Press.

Join Michael Barbaro and “The Daily” team as they celebrate the students and teachers finishing a year like no other with a special live event. Catch up with students from Odessa High School, which was the subject of a Times audio documentary series. We will even get loud with a performance by the drum line of Odessa’s award-winning marching band, and a special celebrity commencement speech.

Gov. Greg Abbott of Texas, a Republican, signed the abortion bill into law on May 19. Opponents say the measure amounts to a ban on abortion, as many women are not aware they are pregnant at the six-week mark, the point at which the procedure is banned by the law.

The measure will also allow any private citizen to sue doctors or abortion clinic employees who perform or help arrange for the procedure.

Ms. Smith said in the interview that she submitted her original speech about the media to the school’s administration for approval. But about 10 days before the ceremony, she was trying to finish an academic project when she kept getting distracted by how upset she was about the law. “I started writing my speech then,” she said.

Before the ceremony, Ms. Smith spent some time considering whether she should go ahead with it. “I said, OK, I can talk at a rally, but the people there already agree with you,” she said. “I thought, there is no better time and place where you are going to reach a group of people from different backgrounds who are going to listen to you.”

“I knew that once I made that speech, a lot of things could change for me,” she said. “I could be burning some bridges. During the speech I got up there and I was like, OK, we are doing this.”

On Sunday night, after she was introduced by her geometry and statistics teacher, Brody Lyons, Ms. Smith said she approached the podium with some dread.

She told the audience that the law was “dehumanizing,” and that graduation was “a day when you are most inclined to listen to a voice like mine, a woman’s voice, to tell you that this is a problem, and it is a problem that cannot wait.”