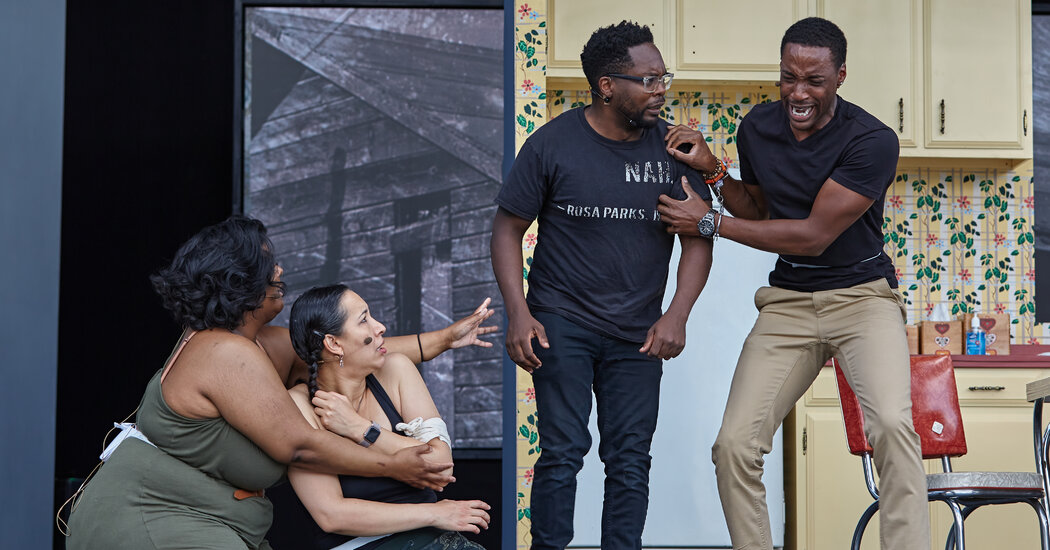 The composer William Grant Still was a student of the renowned experimentalist Edgard Varèse, an arranger for the blues icon W.C. Handy and the creator of the enduringly winning “Afro-American Symphony.” Thanks to his rich catalog of symphonic and chamber music, Still, who died in 1978 at 83, was widely known as the pathbreaking “dean” of Black American composers.

But his operas have struggled to gain a foothold in the repertoire. “Troubled Island,” about the Haitian revolution and its aftermath, boasted a libretto by Langston Hughes and additional lyrics by Verna Arvey, a writer who was married to Still. It premiered at New York City Opera in 1949, but continues to wait for a second production. (A fascinating, if scratchy, recording of the premiere can be purchased from the Still estate.)

Still’s one-act stunner “Highway 1, U.S.A.,” premiered in 1963, has also been a rarity. But it will enter the limelight this weekend with the opening of a new staging, directed by Ron Himes, at Opera Theater of St. Louis. (It runs there through June 17.)

In its two scenes — which together last under an hour — the filling-station owner Bob and his wife, Mary, deal with the ingratitude and arrogance of Bob’s younger brother, Nate, a spendthrift academic whose studies were underwritten by the couple. The plot — its lurid flights counterbalanced by the wholesome devotion of Bob and Mary — swiftly deals with complex, compelling ideas about familial expectation and duty.

Conducted by Leonard Slatkin, a veteran advocate for American music, and featuring a cast of rising stars, the St. Louis production is an early highlight of opera’s fledgling return to live performance as the pandemic eases.

But this “Highway” likely wouldn’t have happened without the pandemic. In a phone interview between rehearsals, the soprano Nicole Cabell said that both she and the baritone Will Liverman had originally been scheduled to perform “Porgy and Bess” in St. Louis this summer.

Though widely loved, “Porgy” — written by white artists — has long overshadowed works by Black composers; the pandemic, in this case, overturned its typical dominance. “Porgy,” Cabell said, was “obviously a production that was too big.”

St. Louis realized that its contracted soprano and baritone leads could play the married couple in Still’s “Highway.” And Cabell credited the company with finding a way to forge ahead with an operatic work of “cultural significance.”

Liverman said that, after 15 months away from performances with an orchestra, “it’s a special thing to come back to work and do a piece by a Black composer, especially after all of the things that have happened with the pandemic, and George Floyd, and how we’re changing our conversations about inclusion.”

Still was a fan of Wagner from an early age, an affection that can be seen in the fluid way he handles narrative transitions. “Nobody has arias that have really clear endings, in my opinion,” Cabell said.

“I feel like you have to be on your toes if you sing Mary,” she added. “Because she is, of course, struggling with lots of conflict: her love of Bob, her suspicion of Nate, her desire to expose him. It jumps around quite a bit, in terms of the mood.”

The tenor Christian Mark Gibbs, who plays Nate, described the effect as “conversational.” Like the other singers, he had not had deep exposure to the work of Still before this production.

“I heard of him, through the course of some of my studies,” Gibbs said. “I did question, while I was in school: ‘Oh, how come we don’t look at any of those things?’ But then you get back to your studies.”

Nate doesn’t have a lot of stage time. He enters mean in the second scene, and only gets meaner. The character’s motivations are barely sketched as the plot moves toward a twisty climax.

“He does leave a lot for your imagination,” Gibbs said. “I can come up with a great back story for this character, before he even sings his first line.”

Himes, the director — who has moved the setting slightly forward, into the 1960s — has his own view of Nate’s troubles: “He may have been a victim of some racial attacks, while he was in school. He is probably suffering from some kind of trauma.”

The cast in St. Louis is relishing what amounts to a highly unusual opportunity in opera. “I think there’s a special energy for them, being an all-Black company,” Himes said. “That’s very rare for all of them in their careers so far, in this classical world.”

There have been few productions or recordings of the work. In the 1970s, Columbia’s Black Composers Series included a pair of excerpts from the opera on an album. It took until 2005 for a complete studio recording to be released, featuring the St. Olaf Orchestra led by Philip Brunelle. (The Mary on that recording, Louise Toppin, also directed a production at the University of Michigan in 2019.)

Gibbs said he has found himself memorizing the other characters’ music. “I walk around singing some of Bob’s melodies all the time,” he said. “I grew up listening to a little jazz and listening to blues and gospel. It has that soul type of feeling.”

That’s the case even though Still, a committed integrationist, didn’t want his work to be viewed merely through a racial lens. “In this opera, there’s no race mentioned at all,” Gibbs said. “That’s another area where it’s open. It can be done by multiple people. He wanted it to be done by various cultural groups.”

Slatkin, the conductor, said he has inserted small touches — including “an occasional flutter-tongue” — to give the orchestration behind Nate’s music a bit more bite. He added that some of the score’s harmonies reminded him of Kurt Weill, but that the music has its own clear identity: “As I’ve really gotten into it, I find that there’s something very fresh and appealing about it.”

“Still’s voice — simply historically, because of when he lived, what he did and what he accomplished — needs to be heard,” Slatkin said.

St. Louis plans to film the performances with an eye to streaming the work later this year. For Liverman, that documentation is crucial. “That’s the thing with Black composers in general,” he said. “I think the music’s out there. It’s just not performed enough. You’re not going to find a million interpretations, like ‘Winterreise’ or something like that. A lot of those works are just hard to come by.”

But he thinks the power of “Highway” will speak for itself. “The show moves right along,” he said. “It’s sort of like a short film or an episode on a show — and it works beautifully in that way.”