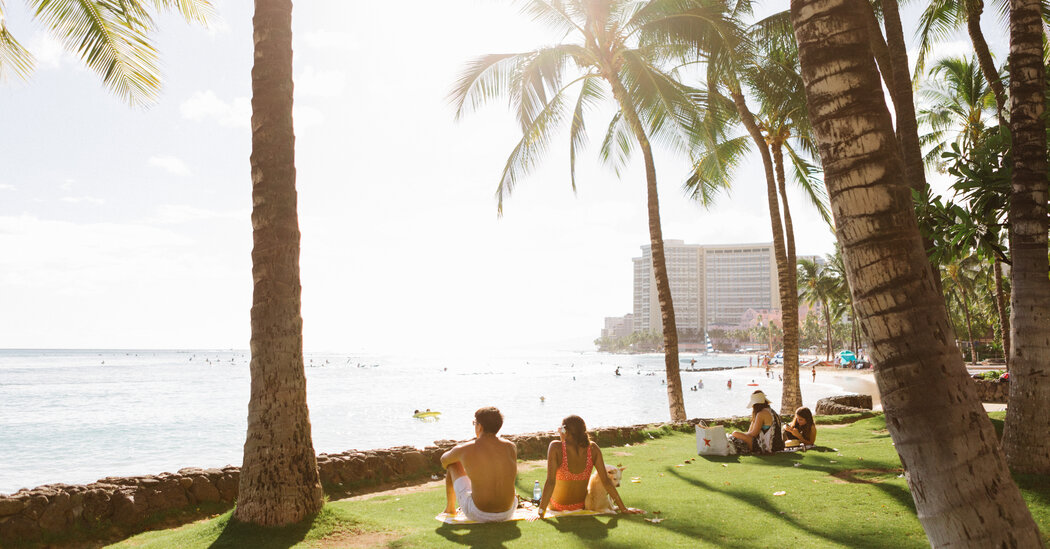 Those who’ve been able to work from home over the last year have had to get creative about their workstations, setting up makeshift offices on balconies, couches or even kitchen counters. Some temporarily relocated to new cities and towns from early in the pandemic.

But a new convergence of factors in the United States — easier access to vaccinations, loosening domestic restrictions, falling coronavirus cases and good weather — has led to a golden opportunity for those tempted to take their work on the road after a year of staying put.

Remote workers who are vaccinated but are not yet required back in an office are enjoying what may be a once-in-a-lifetime window, if they’re in a privileged position to take advantage of it — to hit the road with laptops in tow, and explore the country while getting paid.

Bookings on Airbnb of 28 days or more have nearly doubled in 2021 compared to 2019, with more than half of surveyed guests saying they used the time to work or study, according to a recent Airbnb report. And 71 percent of guests booking long-term stays said they planned to book a similar stay next year.

But as many employees prepare to return to the office in coming months, this summer will probably be the last hurrah of remote work.

Whether you hope to try out a new city for a permanent move or just want to take advantage of the last few months outside the office, here are six cities or towns to consider for remote work this summer.

Sarah Sheu, 29, who is a product lead for the travel app Hopper, has been working from Honolulu since mid-May. Ms. Sheu works from her parents’ home, which they bought after they retired a couple of months ago. At first, she thought the time difference between Hawaii and the East Coast, where many of her colleagues are based (the company is headquartered in both Montreal and Boston), would make it difficult to communicate with them. But it has worked out, she said, and her early start — she logs on at around 5:30 a.m. — leaves her afternoons free to explore Honolulu.

Remote workers might consider staying in one of the many condos overlooking Waikiki Beach, one of Oahu’s most well-known beaches. On your off time, Ms. Sheu recommends bicycling to and around Diamond Head, a state park with a large crater at its center that has well-marked bike lanes and stellar coastal views. You might also go surfing at Waikiki Beach or stand-up paddle boarding at Ala Moana, which Ms. Sheu said usually has small or no waves.

Hawaii currently has the most stringent Covid-19 restrictions in the country, requiring a negative test to travel and a 10-day quarantine for some inter-island travel. Check the latest rules and advice before you go.

If you want to be in wine country …

When Joanna Faltys, 31, moved to Petaluma from Boston in 2015, it felt like the perfect compromise between her desire to be in Sonoma County, where she’d grown up, and her now-husband Brian’s need to be close to the San Francisco Bay for his work in the boating industry.

“It was only once we moved here that we realized what a perfect fit it was for our lifestyle as well,” said Ms. Faltys, who managed group travel programs for more than five years before transitioning to higher education this year. “Petaluma really offers everything we love, beautiful scenery, proximity to outdoor activities, great restaurants and coffee shops and good entertainment options.”

The city also lends itself to remote work, she said, with two centrally located co-working spaces and several coffee shops with Wi-Fi, while offering access to San Francisco, some of the region’s most popular vineyards and its beautiful coast.

“One of the best things about Petaluma is that it has the amenities of a larger city, yet still feels like a small, tight-knit community,” said Ms. Faltys.

Ms. Faltys recommends Acre Coffee, located in the city’s downtown, which she said attracts a good mix of students, remote workers and families. The city is known for its craft breweries, including both Lagunitas and Hen House Brewing Company. There are several beer gardens, including The Block, which features a rotating selection of food trucks. And it also boasts its own mini wine region, the Petaluma Gap.

If you want a manageable city …

For a city with a spirit of social justice and an array of cultural offerings, try Topeka. The city opened Evergy Plaza in 2020, a central hub with free Wi-Fi where people can work or enjoy a monthly concert series, complete with food trucks and pop-up beer gardens.

This summer, Topeka Music Week will be held at venues across the city, culminating in Country Stampede, which is estimated to bring up to 100,000 country music fans to the city. (Proof of vaccination or a negative test is not required to attend, so consider your personal risk first.)

As home of the landmark U.S. Supreme Court case, Brown vs. Board of Education, Topeka has a strong undercurrent of social justice, said Bob Ross, a spokesman for Choose Topeka, which lures remote workers to the city with financial incentives. One of his recommendations for long-term stays is Liberty House, an Airbnb rental which puts profits toward supporting L.G.B.T.Q. youth in the Midwest.

During their off time, people can explore the North Topeka Arts District, known as NOTO, which was restored in 2008 to include murals, galleries and restaurants housed in historic buildings.

Kelly Edkin, a fifth generation Topekan who owns a coffee shop and bistro called Juli’s Coffee and Bistro, said she regularly sees remote workers there. She recommends people visit the Topeka Zoo and Conservation Center, or take advantage of the Kansas River, which flows through the city, or nearby Lake Shawnee for swimming, fishing or kayaking.

But what makes Topeka special, she said, are the people who live there.

“I really think the best part of any place you go, whether you’re working remotely or not, are the people and the attitude,” she said, adding that Topekans are “very friendly and helpful.”

If you’re a foodie…

Named a UNESCO Creative City of Gastronomy in 2015 for its heritage foods and dishes that draw from its Mexican and Indigenous history and location in the Sonoran Desert, Tucson is ideal for culinary enthusiasts.

Visitors can explore the city’s Best 23 Miles of Mexican Food, a trail of restaurants and food trucks featuring Mexican cuisine, or local favorites like Barrio Bread, known for its bread made of Sonoran wheat.

Gina Catalano, who co-founded La Suprema Works and Events, a co-working site based in an old tortilla factory, said that about 20 percent of guests over the last year have been remote workers, with an uptick in the beginning of this year. When they signed up, people reported coming from bigger cities like New York, Pittsburgh and Chicago.

“I’ve lived in this area on and off for the last 20 years and never have I seen such a diversity of people coming from all over the place,” Ms. Catalano said.

Malvika Agarwal, 34, and Niraj Sheth, 36, who both work for Silicon Valley start-ups, moved to Tucson in December, after an earlier trip left Ms. Agarwal struck by the area’s desert landscape and its monsoon season, which is from June to September. She said it reminded her of her home country, India.

“We were amazed that there’s life here, because it’s so dry,” Ms. Agarwal said, “but it’s green, surprisingly, and there’s these giant 60-feet tall cactus that are blooming right now.”

Tucson is also the headquarters of the International Dark-Sky Association, and has large observatories where people can go look at stars and constellations. “We love the stargazing here,” Ms. Agarwal said.

If you want a twofer …

Bath and Brunswick, two neighboring towns along the coast of Maine, are distinct, but their proximity to one another — about 8 miles — by car or a river trail, makes it easy to explore both during an extended stay.

Brunswick, the home of Bowdoin College, has a thriving downtown and, before 2020, had a steady stream of international visitors drawn to the college and the town’s rich arts scene. Bath is on the Kennebec River, has lots of green space and is a more community-driven town, according to Nate Wildes, the executive director of Live + Work in Maine, which recruits remote workers to the state through networking events and direct marketing.

“The culture and the feel together is really well balanced,” he said, though the towns are “very distinct and different.”

He added that most people who come to the state through the remote worker program don’t end up settling in its cities, like nearby Portland, he said, but rather in surrounding towns that offer a better quality of life.

Marie Thompson, 29, a Bath native who moved back after graduating from design school in Boston, agrees. She works as a design lead for Pakt Bags, a travel gear company with remote staff, and said she chose Bath because “there’s so much more space, opportunities for great places to live and work,” while still offering proximity to Portland’s food scene.

Both Bath and Brunswick are near beaches, lakes and rivers, like Popham Beach or the Androscoggin River, as well as “hundreds of miles of recreation trail,” Mr. Wildes said.

For New Yorkers looking to escape their tiny apartments, the travel blogger Gerry Isabelle, who asked to be identified by her first and middle name to protect her privacy, recommends this city in the lush region in upstate New York. She has traveled to the Finger Lakes region for several short stints of remote work throughout the pandemic. “There’s a little bit of everything,” she said.

The Finger Lakes, named for its 11 long, narrow lakes, is home to a number of colleges and universities, state parks and wine trails. And Ithaca’s central location at the foot of Cayuga Lake offers easy access to urban amenities as well as many of the region’s towns and attractions.

“You won’t just be working from home,” Ms. Isabelle said. “You’d literally be working with views of the lake from your window.”

Watkins Glen State Park and the Finger Lakes National Forest are within 30 minutes of Ithaca, and Buttermilk Falls State Park’s stunning water falls and trails are only a 10-minute drive away.

There are also a number of museums to explore within an hour of Ithaca, like Harriet Tubman’s house in Auburn, or the Rockwell Museum in Corning.

In Ithaca and its surrounding areas, it’s common to encounter people selling homemade goods and food, whether at a farmer’s market or on the side of the road. Ms. Isabelle mentioned an ice cream shop called The Spotted Duck whose owners source ingredients from their own farm, or F.L.X. Table, a communal dining experience where one meets people from “all walks of life.” (During the pandemic, the restaurant traded in its signature communal table for smaller, socially distanced tables.) “The energy there is so safe and cozy,” she said about the Finger Lakes.